Where a Gallon of Gas Costs More Than the Minimum Wage 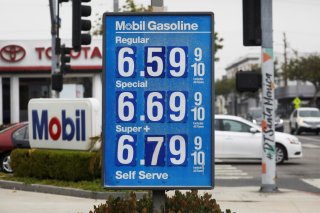 Is an hour’s pay really worth just one gallon of gas? At some gas stations in California, this is apparently true.

As pointed out by CBS News, the federal minimum wage is currently $7.25, but there appear to be several gas stations in the Golden State that are charging at least that amount per gallon.

According to GasBuddy, there are nine stations in California with gas prices above minimum wage.

It’s no secret that gas prices have remained at record highs as Americans head into the long Memorial Day weekend. In fact, for a headache-inducing fifth straight week, the nation’s average gas price has continued to trek higher, rising eleven cents from a week ago to $4.57 per gallon on Monday, according to GasBuddy data. The national average is up more than $1.50 compared to a year ago.

“Against a backdrop of gas prices that have continued to set new records ahead of Memorial Day, Americans have been resilient in their desire to hit the road, but we're certainly seeing increased hesitancy due to rising prices at the pump. Soaring inflation has led to uncertainty over rising costs,” Patrick De Haan, head of petroleum analysis for GasBuddy, said in a release.

“The Covid factor is still present, but has been dwarfed this year by Americans’ concern over high gas prices and dwindling affordable travel options to make use of the best months of the year,” he continued.

Per Fox Business, Phil Flynn, a senior energy analyst at The PRICE Futures Group, noted that gas prices could potentially top out around the Memorial Day weekend.

“A lot of times when we anticipate a tight market and increase in demand, once we hit that demand, we pull off,” he said.

“If I were looking for a top on prices, I would predict it would be right around the Memorial Day weekend and then I think prices will cool down,” he added.

De Haan also held onto hope that the national average won’t reach the psychologically important $5 per gallon this year.

“Prices will be at their highest Memorial Day level ever, [but] I’m hopeful that we could avoid a dreaded national average of $5 per gallon this year,” he said in a statement. “Whether or not we’re able to depends on Americans cutting demand in the face of sky high prices.”