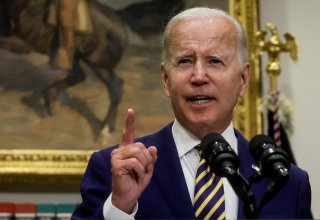 “Assuming that 75 percent of folks who take this on, the president’s student loan cancellation plan, and you look at the average monetary, cash flow on that, it’s going to be about $24 billion per year,” she told CNN on Thursday evening.

The Biden administration announced on Wednesday a wide-ranging effort to cancel massive amounts of federal student loan debt for an estimated forty-three million borrowers. The action is also expected to completely wipe clean the student loan debt of about twenty million individuals.

Those with federal student loans who make under $125,000 annually, or couples earning less than $250,000, qualify for up to $10,000 in forgiveness. But if a borrower received a Pell Grant to attend college, they could potentially get up to $20,000 in relief.

The White House has stated that around 60 percent of all federal student loan borrowers received Pell Grants, which are only given to undergraduate students who “display exceptional financial need and have not earned a bachelor’s, graduate, or professional degree” and “does not have to be repaid, except under certain circumstances,” according to the Education Department.

Additionally, Biden’s student loan announcement extended the moratorium on repayments till January 2023 and proposed creating a new income-driven repayment (IDR) plan, designed to assist people who have a difficult time making large monthly payments. This will allow borrowers to pay no more than 5 percent of their monthly income on undergraduate loans, a substantial decrease from the current 10-percent threshold.

Meanwhile, NBC News reported that the White House has hit back at Republicans who have bashed Biden’s student loan forgiveness plan. In a series of tweets, the White House highlighted the fact that several lawmakers, including Rep. Marjorie Taylor Greene (R-GA), Rep. Vern Buchanan (R-FL), and Rep. Mike Kelly (R-PA), among others, had large sums of their Paycheck Protection Program (PPP) loans forgiven.

“President Biden’s inflation is crushing working families, and his answer is to give away even more government money to elites with higher salaries,” he said in a statement on Twitter.

“Democrats are literally using working Americans’ money to try to buy themselves some enthusiasm from their political base,” he continued.