Will Donald Trump Jr. Run for President in 2024? 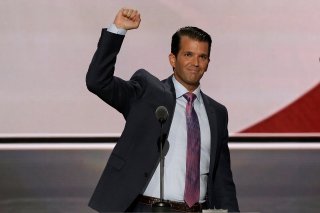 Donald Trump Jr. made his first political, public appearance at the Republican National Convention in 2016, as he marched across the stage, waving and flashing subtle smiles at the bustling crowd. Once he reached the podium, he greeted the camera and the attendees with a stern, yet powerful look, smirking at the hoots of excitement.

After introducing himself and his children, Trump Jr. then paused, emphasizing that he is the son of a “great man.”

“I’m an American, and tonight I want to talk to you about the country we live in, the country our children will grow up in. To my generation, this is the most important election of our lifetime, one that will determine the future of our country and, in turn, the future of the world,” he said.

Trump Jr.’s 2016 remarkable convention speech marked the beginning of what could be a bright career in politics.

The political world raved about his speech, with some reporters and analysts heeding that Trump Jr. is one to keep an eye on in the future. He praised his father’s accomplishments as a businessman and embraced the future president’s public speaking strategies, leading the crowd through contentious topics and “Trump!” chants.

Four years later, President Donald Trump’s eldest son delivered a forceful speech on the opening night of the 2020 Republican National Convention, applauding his father’s leadership to contain the spread of the novel coronavirus. Trump Jr. spun Trump's presidency to be a success and said a Democratic White House would create complete chaos and violence across the country.

Trump Jr.’s words last week triggered speculations from politicians, analysts, and reporters about his potential candidacy for president in 2024, as it might have been the start of a presidential campaign trail that allows “Trumpism” to outlast the current president.

Casual talk that Trump Jr. would run for president in the future isn’t new. Ever since Trump swiped the White House in 2016, Trump Jr. has earned a strong reputation, morphing to be one of the most admired political weapons the president has on his team.

He’s become a full-time pro-Trump pundit who has traveled the country — before the virus struck the globe — in support of his father’s presidency and 2020 campaign, becoming one of the most-requested speakers at Trump’s campaign events. As social distancing and strict mask-wearing has been enforced, Trump Jr. changed public appearance plans and has grown to be a top virtual fundraiser for the party, as his highest priority for the next two months is to get his father reelected.

Does He Have What It Takes?

Trump Jr.'s early commitment to his father’s candidacy thrust speculation for his own presidential bid — potentially in 2024 — as he’s coined a sturdy spot in the country’s politics, thanks to the help of his dad. But, a Trump defeat in November could brutally squash his chances of being in the White House in just four years.

Although Trump Jr. has made a name for himself throughout his father’s presidency, does America know Trump Jr. without a Trump?

The president’s son built his own brand in the last two years as he published two books and launched a podcast — but tends to avoid political discussion on it. But, so much of Trump Jr.’s beliefs and ideas are associated with his father’s, as he continues to follow Trump’s political path, rather than shape his own.

If the president does lose in November, Trump Jr. could, however, start fresh and frame his own political path for future presidency.

Even though polls have voted in favor of his candidacy and followers think he has a strong chance of running for presidency one day, Trump Jr. has made it clear in the past that he has “no intention” of fighting for the White House in 2024.

"My only goal and my myopic focus is making sure my father gets re-elected because I want to keep the winning continuing,” he added.

Sources close to the president’s son echoed his remarks about not running, but some have suggested that he could have a career in commentating — either on a podcast or on a conservative news network — as he’s a compelling and powerful member of the Republican party who can persuade and inform about the waves of “Trumpism.”

Trump Jr. has also expressed interest in working for the National Rifle Association or acting as chairman of the Republican National Committee, according to the Times.