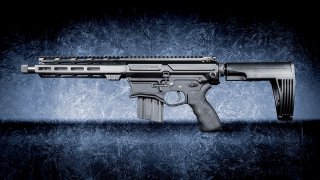 Waves of partisan conflict watered down Democratic hopes to swiftly pass legislation on gun control in the wake of two mass shootings, as party members in the Senate stand largely separated, despite having majorities in both congressional chambers.

Sen. Joe Manchin (D-W.Va.), a centrist and one of the loudest Democrats in the upper chamber, is leading the push to reject the background checks bill passed by the House, while other party members like Sens. Dianne Feinstein (D-Calif.) and Ben Cardin (D-Md.) are advocating for an assault weapons ban and restrictions on high-capacity magazines, which are policies that would likely receive pushback from moderate Democrats and Republicans, according to The Hill.

And this time, Democrats cannot look to pass gun control measures through budget reconciliation, a legislative procedure that wouldn’t require a single Republican vote. So, any gun control proposal would need to rally support from not only the entire Democratic caucus in the Senate but also from ten Republicans.

But Senate Majority Leader Charles Schumer (D-N.Y.) will likely face an uphill battle on gun control legislation, a key Democratic priority, as his own caucus is disunified.

“There is very little chance of a gun control bill of any form getting 60 Senate votes,” John Aldrich, a Pfizer-Pratt professor of political science at Duke University, said in an email interview. “If I were advising the Senate majority leader, I would counsel Schumer to use this as an opportunity to put pressure on at least a few Republicans but expect to fail to win passage now. It is further good for Democrats to demonstrate to their constituencies that they are still making the attempt to get background checks and so on into law, but to hope to return to this sort of legislation once (or if) there is a weakening of the filibuster/cloture rules.”

Manchin said Tuesday that he does not support the two gun control bills passed by the House earlier this month, and is instead moving to revive negotiations with Sen. Pat Toomey (R-Pa.) on their joint proposal unveiled in 2013 after the Sandy Hook Elementary School mass shooting.

“No, I don’t support what the House passed,” Manchin told CNN as he left the Senate floor. “Not at all.”

The Manchin-Toomey proposal is much narrower than the recently passed House bills, as it would require background checks for guns sold over the internet or at gun shows but exempt transactions between friends and families.

“The second amendment was originally intended to support militias. [The Supreme Court of the United States] has interpreted it to allow gun ownership in ways that make gun control laws difficult to sustain,” Michael A. Gillespie, a political science and philosophy professor at Duke, said in an email interview. “Sensible Democrats recognize this and while they continue to seek to pass legislation, they know that it may be overturned by the courts and that gun manufacturers will reengineer their weapons to circumvent whatever laws they pass often with legislative connivance.”

Gillespie added, “As a result, gun control efforts for many congresspersons and Senators are symbolic acts and generally reflect the opinions of their constituents.”

But Manchin’s opposition to the House bills underscores a deep challenge for Democrats who already hold a tight margin in the Senate, as Congress and the White House faces pressure to speed up action on gun safety after the shootings in Boulder, Colorado, and Atlanta, Georgia.

“I would advise Democrats to tread but tread lightly on gun control and partisan polarization, because if there is a weakening of the filibuster and/or cloture rules, then there is a chance that at least modest gun control can pass with a small number of Republican votes, which would make it much more likely that such a bill would be able to withstand repeal efforts if the Republicans capture control of the Senate (and House) in the near future,” Aldrich said.

“I have long been a supporter of the Manchin-Toomey proposal, without infringing on the rights of law-abiding Americans, to change and close some of the loopholes in the background checks so that they apply to online sales, for example,” Collins told reporters Monday.

Some Republicans, like Sen. John Cornyn (Texas), said that they would stand behind a bill that requires background checks for commercial gun sales and transfers, but Democrats have firmly rejected the push.

“If I were advising Senate Republicans, I would advise soft pedaling at least the most partisan-style inflammatory language on this, because that could strengthen Democratic resolve to seek a stronger bill than otherwise under revised filibuster rules,” Aldrich said.

Manchin has also expressed interest in commercial transactions in any upcoming bill.

“Commercial background checks is the most, I think, reasonable approach,” he said on Wednesday. “I’ve always said that.”

Other gun control-related divisions in the Democratic Party relate to the ban on assault-style weapons, an initiative that’s been led by Feinstein, according to The Hill.

During a Senate Judiciary Committee's hearing after the shooting in Boulder, Feinstein told the committee’s chairman Sen. Dick Durbin (D-Ill.) that she has “35 co-sponsors on a renewed assault weapons ban that is in this committee, and I would hope we can hold a hearing and perhaps consider that legislation.”

But one expert noted that forms of gun control legislation could, in fact, be “achievable.”

“These objectives are achievable even in a closely divided Senate even with the existing 60-vote requirement intact. The president will not take on battles that he knows are not winnable. Like his reluctance to tamper with the filibuster, he has decided that incremental progress is better than none. This may not satisfy the progressives but Joe Biden is, by nature, a half-a-loaf politician,” Ross Baker, a political science professor at Rutgers University, said in an email interview.