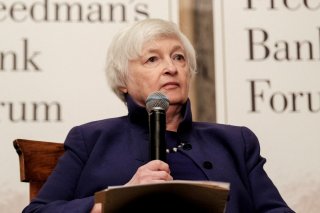 Even as Americans contend with forty-year-high inflationary pressures and markets remain stuck in bear territory, Treasury Secretary Janet Yellen asserted on Thursday that she doesn’t think the nation tip into a recession.

“We’re at a full employment economy. It’s very natural that growth would slow. And it has over the first three quarters of this year, but it continues to be okay. We have a very strong labor market. I don’t see signs of a recession in this economy at this point,” she continued.

However, Yellen later noted that “inflation is very high—it’s unacceptably high and Americans feel that every day.” She acknowledged that consumer prices would take time to recede, saying the efforts to bring inflation back down to levels “that people are more accustomed to” will likely be spread out over “the next couple of years.”

Yellen also touched on how Biden responded last week to questions surrounding the economy. She said she agreed with the president’s assessment that it is “strong as hell,” which quickly drew plenty of criticism from Republicans.

“If you look around the world, there are a lot of economies that are really suffering not only from high inflation but very weak economic performance, and the United States stands out,” Yellen said.

“We have unemployment at a fifty-year low. … We saw in this morning’s report—consumer spending and investment spending continued to grow. We have solid household finances, business finances, banks that are well capitalized. … This is not an economy that’s in recession and we continue to do well,” she added.

According to the latest recession probability models released by Bloomberg economists, there are signs that a U.S. recession is effectively certain within the next twelve months. That projection comes on the heels of the Wall Street Journal’s latest survey of sixty-six economists, who say that the odds of a recession within the next twelve months is 63 percent—the first time the survey pegged the probability above 50 percent since July 2020.

Yellen also took time to address the battle lines that have been drawn in Washington over raising the debt ceiling.

“The president and I agree that America should not be held hostage by members of Congress who think it’s alright to compromise the credit rating of the United States and to threaten default on U.S. Treasuries, which are the bedrock of global financial markets,” she said.

It’s “really up to Congress to raise the debt ceiling. … It’s utterly essential that it be done, and I’d like to see it occur in the way that it can occur,” she concluded.