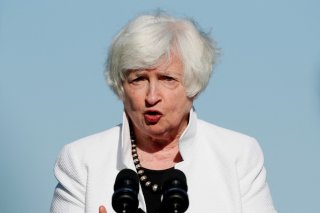 Amid government data released earlier this week that showed that U.S. consumer inflation surged to 9.1 percent year-over-year, Treasury Secretary Janet Yellen on Thursday asserted that bringing down fast-rising prices is the biggest priority for the Biden administration.

“Inflation is unacceptably high, and that's something that's evident from Wednesday's report. And I believe it's appropriate that it's our top—it should be the top priority to bring inflation down,” she said during a news conference in Bali ahead of the Group of 20 finance ministers’ meeting.

Per CNBC, Yellen noted that nearly half of the increase in consumer prices came from high energy costs.

“We’re first and foremost supportive of the Fed’s efforts; what they deem to be necessary to get inflation under control,” she said. “Beyond that, we are taking our own steps which we believe will be supportive in the short term to get inflation down—particularly what we’re doing on energy prices and the Strategic Petroleum Reserve. And also the work that we’re doing to institute the price cap on Russian oil and to avoid potential future spikes in oil prices.”

The business news outlet also reported that Federal Reserve gov. Christopher Waller said that he’s open to what would be the most aggressive interest rate hike in decades at the Fed’s meeting later this month. He stated that he supports a seventy-five basis point hike at the July 26-27 central bank meeting.

“My base case for July depends on incoming data,” Waller said in remarks at an event in Victor, Idaho, on Thursday.

“We have important data releases on retail sales and housing coming in before the July meeting. If that data comes in materially stronger than expected, it would make me lean towards a larger hike at the July meeting to the extent it shows demand is not slowing down fast enough to get inflation down,” he added.

However, Yellen contended that rising interest rates could have a spillover effect into other economies, as a stronger U.S. dollar would make other currencies comparatively weaker. On the flip side, their exports could be viewed more attractive by being cheaper.

“On the one hand, it can strengthen their ability to export which is good for their growth,” she said. “On the other hand, to the extent that countries have dollar-denominated debt, it can make those debt problems—which already are very severe—more difficult.”

“Central banks are stepping up to control inflation, it’s a priority. They have to keep going until it’s clear that inflation expectations remain firmly anchored,” she told CNBC on Friday.

“At the moment we still see inflation going up; we have to throw some cold water on it,” she concluded.