Yellen Still Confident a Recession Is Not ‘Inevitable’ 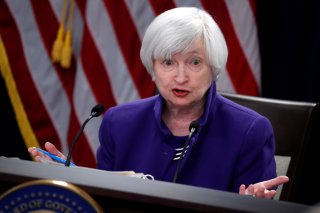 Treasury Secretary Janet Yellen contended this past weekend that the dreaded recession that many Americans are now expecting is not “at all imminent.”

“I expect the economy to slow,” Yellen told ABC News’ “This Week.”

“It's been growing at a very rapid rate, as the economy, as the labor market, has recovered and we have reached full employment. It's natural now that we expect a transition to steady and stable growth, but I don't think a recession is at all inevitable,” she added.

“Clearly, inflation is unacceptably high. It's President [Joe] Biden's top priority to bring it down. And [Fed] Chair [Jerome] Powell has said that his goal is to bring inflation down while maintaining a strong labor market. That's going to take skill and luck, but I believe it's possible,” she continued.

Talk of a recession has accelerated in recent months as inflation has surged to a forty-year high of 8.6 percent, according to the most recent data from the Bureau of Labor Statistics. In response, the Federal Reserve has taken aggressive steps to counter fast-rising consumer prices, such as the seventy-five basis point interest rate hike earlier this month. Another sizable rate increase is expected in July.

“Consumer spending remains very strong. There's month-to-month volatility, but overall spending is strong, although patterns of spending are changing and higher food and energy prices are certainly affecting consumers,” said Yellen, who had previously admitted that she mistakenly believed inflation would be “transitory.”

“But bank balances are high. It's clear that most consumers, even lower-income households, continue to have buffer stocks of savings that will enable them to maintain spending. So I don't see a drop-off in consumer spending as a likely cause of the recession in the months ahead. And the labor market is very strong, arguably the strongest of the post-war period,” she continued.

Meanwhile, per Yahoo Finance, Goldman Sachs strategists appear to have a much more pessimistic view of the U.S. economy, lifting their recession probability from 15 percent to 30 percent.

“The main reasons are that our baseline growth path is now lower and that we are increasingly concerned that the Fed will feel compelled to respond forcefully to high headline inflation and consumer inflation expectations if energy prices rise further, even if activity slows sharply,” he concluded.