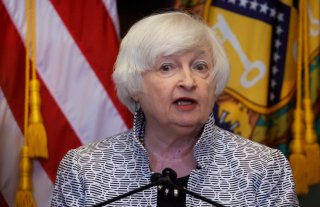 Treasury Secretary Janet Yellen on Sunday warned that gas prices, which have trekked lower significantly since the national average hit a high of just over $5 per gallon in June, might spike again this coming winter.

“Well, it’s a risk. And it’s a risk that we’re working on the price cap to try to address,” Yellen said during an interview on CNN’s State of the Union.

“This winter, the European Union will cease, for the most part, buying Russian oil. And, in addition, they will ban the provision of services that enable Russia to ship oil by tanker. And it is possible that that could cause a spike in oil prices,” she continued.

Yellen explained that this concern is why G7 nations are proposing a pre-cap on Russian oil, which would take direct aim at Russian revenue streams amid the ongoing war in Ukraine.

“Our price cap proposal is designed to both lower Russian revenues that they use to support their economy and fight this illegal war, while also maintaining Russian oil supplies that will help to hold down global oil prices,” she said.

According to AAA data, the national average price for a gallon of gas fell seven cents over the past week to reach $3.71, a level not seen since early March. The current price is 26 cents less compared to a month ago but 54 cents more than last year.

“This trend has helped pump prices fall steadily for three straight months and, with fall approaching, more markets could soon see prices below $3 per gallon,” he continued.

“Although gasoline demand has increased slightly, lower oil prices have led to falling pump prices,” AAA wrote. “If gasoline demand begins to subside, as it typically does post-Labor Day with the end of summer driving, pump prices will likely continue to decrease.”