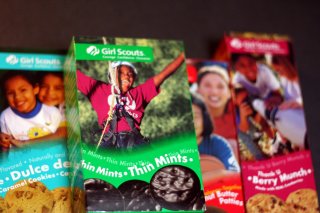 The pandemic, and its aftermath, has led to all sorts of strange and once-in-a-lifetime weird occurrences in the economy, including a long list of strange shortages. There wasn’t enough lumber until eventually there was. Demand crashed for gasoline, before surging again. Labor remains in short supply.

But it turns out there’s another unusual supply disruption: There’s a surplus of Girl Scout Cookies.

According to the New York Times, the Girl Scouts have 15 million boxes of unsold cookies, as a result of shrinking membership and the pandemic, which allowed for much less selling than is typically the case over the past year.

“Given that a majority of cookies are sold in person by girls at booths or other face-to-face methods, a decrease in sales was to be expected,” Kelly Parisi, a Scouts spokeswoman, said in the statement to the newspaper. “It’s exceedingly rare to have significant excess inventory, but the pandemic greatly impacted our cookie program.”

The spokeswoman added that the Girl Scouts have traditionally dealt with cookie surpluses by “donating extra boxes to the military or to emergency medical workers.”

In addition to that, the tradition of Girl Scouts giving cookies to their parents to sell in their offices has also been a no-go, with so many offices closed for the last year.

Of the 15 million unsold boxes, 12 million never left the warehouses the organization maintains in Kentucky and Indiana.

“Here’s something that’s always bothered me about Girl Scout Cookies. Why can’t you just buy them in a supermarket? Why are they only available once a year through some weird organization? It’d be like if they only sold Coca-Cola in July and you could only buy it from the Knights of Columbus,” Mulaney joked.

“Girl Scout Cookies are delicious. They come in Thin Mint and Samoas and also…other flavors. How come I have to know a child in a beret in order to get them? Just sell me the cookies. You know what I mean? I have American money. Just put them in a store and I’ll buy them.

"Do the people who actually make the thin mints realize that they have a best seller on their hands? How long is this exclusive sales contract going to last where they only sell the cookies through a weird child army in tablecloth dresses? You know, according to the Girl Scouts’ website, you cannot buy Girl Scout Cookies online. Do you know what you can buy online? Everything. You can buy everything online.”

The Girl Scouts did change their business model in a key way-they reached an agreement with Grubhub earlier this year, to distribute the cookies that way.