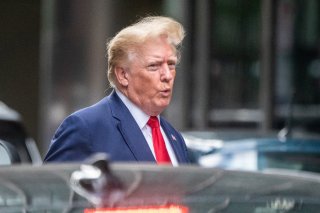 Former President Donald Trump said in a statement that he invoked his Fifth Amendment protection against self-incrimination as he testified under oath Wednesday in the New York attorney general’s years-long civil fraud probe into his business dealings.

The Associated Press reported that Trump arrived at Attorney General Letitia James’ New York City offices in the morning before announcing later that he “declined to answer the questions under the rights and privileges afforded to every citizen under the United States Constitution.”

“I once asked, ‘If you’re innocent, why are you taking the Fifth Amendment?’ Now I know the answer to that question,” Trump’s statement read.

“When your family, your company, and all the people in your orbit have become the targets of an unfounded politically motivated Witch Hunt supported by lawyers, prosecutors and the Fake News Media, you have no choice,” he continued.

The James-led New York investigation involves allegations that Trump’s company, the Trump Organization, intentionally misled lenders and tax authorities about the value of prized assets like golf courses and skyscrapers. James has stated in court filings that her office uncovered “significant” evidence that Trump’s company “used fraudulent or misleading asset valuations to obtain a host of economic benefits, including loans, insurance coverage, and tax deductions.”

Trump has denied any wrongdoing, contending that seeking the best valuations is a common practice in the real estate industry.

“My great company, and myself, are being attacked from all sides,” Trump recently wrote on Truth Social, the social media platform he founded. “Banana Republic!”

Once the probe concludes, the attorney general could give the green-light on lawsuits seeking financial penalties against Trump or his company or even a ban on them being involved in certain businesses.

Two of Trump’s children, Donald Jr. and Ivanka, testified recently, two people familiar with the matter said, according to the Associated Press. They were not authorized to speak publicly and did so on condition of anonymity.

Trump invoked his Fifth Amendment protection two days after FBI agents searched his Mar-a-Lago estate in Palm Beach, Florida, as part of an unrelated federal probe into whether he took classified records when he left the White House. Trump’s attorney said that agents seized about a dozen boxes of documents.

The search is related to an ongoing investigation into whether laws were broken when boxes of White House records, which included some documents marked as classified, ended up at Trump’s estate instead of the National Archives.