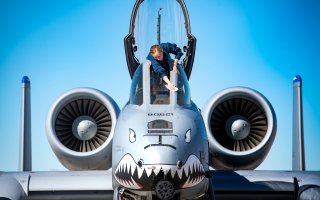 Here's What You Need to Know: The battle over which planes to keep and which to retire is a fierce one.

General Douglas McArthur quoted an old army ballad in his farewell address to Congress with the words “Old soldiers never die, they just fade away,” however lawmakers today likely won’t support similar sentiments from the United States Air Force to let some of its old warbirds rust away in retirement. The Air Force had announced plans to mothball its A-10 Warthog, KC-135 refueling tankers and even RQ-4 Global Hawk surveillance drones during the new fiscal year.

However, the House and Senate Armed Services committees pushed back last week and put forward the conference report of the fiscal year 2021 (FY21) National Defense Authorization Act (NDAA), Defense News reported. A final version of that bill, which had input from both chambers, was expected to be approved by Congress this week. President Donald Trump has threatened it would be vetoed when it reaches his desk.

The NDAA contained a number of policy provisions—including regarding the Department of Defense’s (DoD’s) organizational structure and the issue of military bases named for Confederate officers. However, at issue for the Air Force is that the Congress wouldn’t support its calls to divest more than 100 aircraft. Service leaders have argued such a move would free up funding for modernization priorities that include space technologies as well as the Joint All-Domain Command and Control concept.

Lawmakers on Capitol Hill have given the green light for the Air Force to retire some tankers, cargo aircraft and even some bombers, but at issue is the A-10 and Global Hawk platforms, which both are stridently protected. Defense News also offered a breakdown of what the Air Force would send to the “boneyard” as well as the reaction from Congress.

Key to the case for the A-10—the Air Force wanted to retire just forty-four of the venerable aircraft and instead maintain roughly three squadrons, about 237 that could still be used in close-air support missions. Congress stipulated in the NDAA that no funding be used to divest or retire any of the Air Force’s 281 A-10 Warthogs.

Bombers were another touchy subject, as the service wanted to retire seventeen of the oldest of the B-1 bombers, which the Air Force said put a strain on the fleet due to the manpower required to keep the old warbirds airworthy. In this case progress was made, as Congress had repealed an existing law that previously required the Air Force to maintain at least thirty-six combat coded B-1s, meaning that the elected leaders essentially agreed to the reduction.

Lawmakers also stipulated that the Air Force maintain ninety-two bombers of any kind in its primary mission inventory, while four B-1s must be put in storage so that those aircraft could be reclaimed if needed. It is clear if those bombers that are being sent to permanent or even semi-permanent retirement have undergone some of the most recent upgrades. Moreover, the Air Force has remained committed to keeping the B-1B Lancer updated and has explored ways to enhance its capabilities.

The Air Force has also called for the retiring of thirteen of its KC-135 and sixteen KC-10s in FY21, but the NDAA would forbid any retirement of the KC-135 refueling tanks over the next three years. Yet, Congress did seem to be willing to offer some latitude and allowed the Air Force to scale down to fifty primary mission KC-10A in FY21, thirty-eight primary mission KC-10A the following year and down to just twenty-six in FY23.

Drones were another sticking point, and Congress nixed the Air Force’s plan to retire all of twenty-four its Global Hawk Block 20 and 30 surveillance drones. That would have left the RQ-4 Block 40s and the U-2 spy plane to conduct high-altitude surveillance mission.

This was not the first time that the Air Force has tried to ground the Global Hawk and U-2s, but Congress has refused to permit the retirement of either aircraft. Lawmakers have now asked for certifications from the DoD that the Air Force is developing a cost-effective way to replace the RQ-4 or U-2.

For now, it seems a compromise will have been made and that could mean the Air Force is stuck with aging platforms it would rather see fly off into the sunset.