$15 Minimum Wage Is a Fraught Fight Filled with False Promises 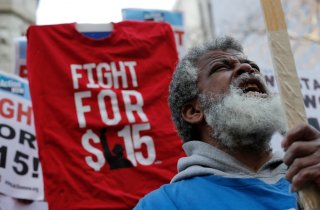 Key point: That blanket sentiment—that the absence of a clear jobs effect from some minimum wage rises shows that the “law of demand” just doesn’t ever apply in the low wage labor market—is empirically incorrect.

That blanket sentiment—that the absence of a clear jobs effect from some minimum wage rises shows that the “law of demand” just doesn’t ever apply in the low wage labor market—is empirically incorrect. But there’s always been obvious theoretical problems with extrapolating from some studies to a more general rule about the effects of further minimum wage hikes, especially given the methodologies of the existing research.

First, it is theoretically possible that the impact of a minimum wage hike on jobs might take a good time to take effect, with an increase in hourly labor costs dampening future job creation for affected groups rather than leading to direct layoffs. Businesses face a host of short-term “frictions” that mean it is easier to initially cut costs in other ways, or simply re-adjust their future hiring decisions, rather than fire workers. It takes time to consider and invest in new machinery, for example, that might replace low-wage workers.

Second, and perhaps even more importantly, the fact that a small minimum wage hike has small employment effects doesn’t mean that much larger future hikes would too.

To account for these possibilities, this contentious policy issue could therefore benefit from research with certain features. Ideally, we would want researchers to:

a) examine the impact of a minimum wage hike over long periods of time;

b) assess the extent to which larger minimum wage hikes have bigger effects on employment than small increases;

c) and, given the potential for researchers to cherry-pick samples, time periods, or control variables to get the results they want, have the researchers outline a pre-analysis plan, whereby they outline the data and methodology they will undertake in advance.

Those are exactly the features of a new working paper from UC San Diego academic Jeffrey Clemens and the AEI’s Michael Strain.

After the Great Recession, there was a pause in both state and federal efforts to increase minimum wages, creating a nice baseline for assessing the impacts of increasingly divergent state minimum wage policies since. After publishing some papers examining the very short-run effects of state minimum wage changes between 2011 and 2015, the pair pre-committed to using some tried-and-tested estimation and evaluation methods to assess the impact of minimum wage hikes through 2019 on young workers with low levels of education and on all 16–21-year-olds.

Using a host of pre-announced control variables for the general economic performance of the state, they found that:

The pair then buttressed their pre-committed analysis with more novel estimation methodologies, which show that “employment effects of relatively large minimum wage increases accumulate gradually over time.” In other words, the impact on jobs of raising the minimum wage today leads to a weaker employment performance years later.

This clever paper then can go a long way to providing compelling explanations for why some minimum wage hikes might have negative effects on employment, while others do not, and why short-term analyses can miss significant longer-term consequences. And the fact that the researchers told us what they were going to do in advance gives us confidence that this is not a case of cherry-picking time periods, control variables, or states to examine to give the pair the results they wanted.

Democrats in Congress and across the country continue to push for aggressive minimum wage hikes. In doing so, they love to draw on studies finding modest effects of raising the wage floor on jobs. But economic theory shows that, whatever your model of the labor market, you cannot keep raising minimum wages forever without the law of demand biting. This work, as with the Seattle studies before it, shows (again) that larger minimum wage hikes have negative employment consequences for those most affected—in this case the young and less-educated.