In 1944, "Operation Bagration" Sent the Nazis Into Full Panic 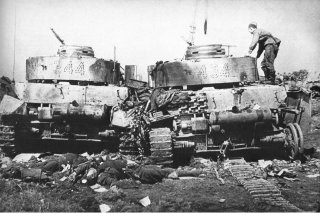 Here's What You Need To Remember: The Nazis failed spectacularly in the summer of 1944 for three main reasons - elaborated below.

The Soviet army’s Operation Bagration offensive in June 1944 destroyed their greatest nemesis — Nazi Germany’s Army Group Center — and drove hundreds of thousands of Soviet troops and thousands of tanks from east of Minsk into the Third Reich itself.

It was, arguably, the greatest disaster for Germany in World War II, ironically kicking off three years to the day after Germany’s invasion of the Soviet Union, and resulting in more than 400,000 casualties inflicted on the Reich’s already badly-depleted armed forces.

Bagration’s outcome showed the success of Soviet deep operations, a military strategy pioneered by a coterie of generals — such as Vladimir Triandafillov and Mikhail Tukhachevsky — in the 1920s and 1930s.

This theory of warfare aimed to send enormous military formations crashing into an enemy’s front line in different places, often one after another in waves, with heavily-armored “shock” armies breaking through weak points into an enemy’s logistical backbone in the rear. Given the chaos and disruption caused by this strategy, the enemy would not know where the overpowered shock armies would hit.

The Soviets overestimated German strength when planning Bagration, believing they faced some 850,000 Germans opposite them. This caused a delay to the offensive as the Soviets amassed more than 1.2 million soldiers and another 400,000 with the 1st Belorussian Front — a detached “left wing” taking part in a separate, but related, upcoming offensive from the south aimed at central Poland.

In reality, the actual, engaged combat strength of Army Group Center was around half of the Soviet estimate, although the estimate of total soldiers in the formation was correct.

But in any case, it was better to have too much than too little, and the Soviet armies found themselves overruning the German divisions, filled with soldiers stunned at the unexpected size and strength of the attack. In total, the Soviets committed more than 4,000 tanks, 34,000 artillery pieces and 4,800 aircraft.

German figures counted 495 tanks, more than 2,500 artillery pieces and 602 aircraft — a shocking number and indicative of the demechanization of the battle-worn German army in the later years of the war.

The Germans underestimated the Soviets. This is partly due to distraction at the highest levels of the Third Reich. A June 1944 Soviet offensive aimed at Finland — which would later knock Finland out of the war — absorbed attention in Berlin.

Most of all, the Western Allies’ invasion of Normandy on June 6 set off panic. Axis headquarters often ignored warnings from subordinates in the East regarding Soviet movements, and it wasn’t until day three of Bagration that German high command recognized it as a threat.

Soviet maskirovka, or deception, was integral to the success of Bagration. While Army Group Center’s command knew an offensive was coming at some point, Soviet troop movements confused the Axis as to its direction, which resulted in reserve Panzer units being in the wrong place at the wrong time when the offensive launched.

The declining strength of the Luftwaffe — a key source of reconnaissance — limited intelligence, as did the increasingly effective measures undertaken in the Soviet rear at rooting out Nazi spies, according to historian David Glantz’s 2015 tome When Titans Clashed: How the Red Army Stopped Hitler. The Soviets also kept down radio chatter, moving orders by courier, inhibiting the Germans from snooping on their plans.

The partisans had become a considerable problem for the Germans by 1944, with tens of thousands of paramilitaries operating behind the lines. Just before Bagration launched, the partisans conducted a stunning series of attacks on German-held infrastructure, knocking out “more than a thousand transportation nodes,” Glantz wrote, “making German retreat, resupply, and lateral troop movements impossible.”

The partisans, combined with the threat of Soviet troops pushing toward Romania and Poland from the south through Ukraine, stretched the German lines thin in Army Group Center’s area of operations — opening gaps for Soviet armored breakthroughs. At this point in the war, Germany could not replace its losses. However, the Soviet Union could — and did.