This 1970s Su-17 Soviet Fighter Is Still Fighting Over Syria 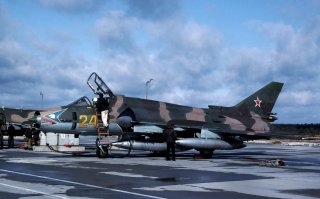 Here's What You Need to Remember: Su-17s left Russian service alongside their MiG-23BN and MiG-27 counterparts during defense reforms during the 1990s and 2000s as single-engine aircraft were not considered survivable enough for air-to-ground combat.

This article was first published several years ago and is being republished due to reader interest.