The 1999 Kosovo War Proved That U.S. Stealth Fighters Can Be Defeated 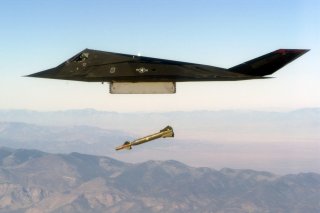 Here's What You Need To Remember: The F-117 shootdown was an embarrassing, though fortunately non-fatal, episode for the U.S. Air Force. It has been endlessly cited since as ‘proof’ that supposedly radar-invisible stealth planes could ‘easily’ be shot down by even dated Soviet-era SAM systems.

At 8 p.m. on March 27, 1999, a bizarre-looking black painted airplane cut through the night sky over Serbia. This particular F-117 Nighthawk—a subsonic attack plane that was the world’s first operational stealth aircraft—flew by the call sign of Vega-31 and was named “Something Wicked.” Moments earlier, it had released its two Paveway laser-guided bombs on targets near the Yugoslav capital of Belgrade. Its pilot, Lt. Col. Dale Zelko, was a veteran with experience in the 1991 Gulf War. A dozen Nighthawks had deployed to Aviano, Italy on February 21 to participate in Operation Allied Force—a NATO bombing campaign intended to pressure Belgrade into withdrawing its troops from the province of Kosovo after President Slobodan Milosevic initiated a brutal ethnic cleansing campaign seeking to expel the Kosovar Albanian population.