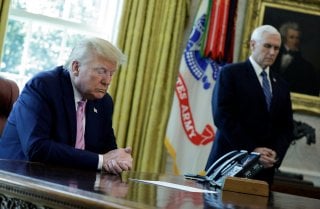 When both Joe Biden and Mike Pence wrote opinion pieces in The Christian Post in the final week of the 2020 US campaign, the current and former vice-presidents vied for the Christian vote with theological and political arguments. But, like many politicians before them, they also invoked history.

Most politicians seeking election claim that they have followed the founding fathers, embodied Christian ethics and respected the political process. These common grounds around Christianity, history and politics can become battlegrounds when Americans weaponise the ties that bind.

The contest for America’s future is a struggle over its past. Because Americans lack a shared historical memory, increased reflection on the past contributes to polarisation.

Donald Trump’s 2016 campaign slogan wrapped a historical claim about national decline around a vision of progress. America was great, and Trump would “Make America Great Again” (MAGA). This slogan inspires hope and instils fear. Was America ever great for everyone? And will Trump restore greatness for all Americans or only for white Christian males?

In a new book, I explore the landscape of historical memory by looking at Protestant reactions to Trump’s MAGA message. Although my research focused on Protestants, similar patterns of forgetful remembrance exist among Catholics and likely among the wider population – religious or irreligious. Christians tend to approach the past in one of three ways: make America great again, make America lament, and make America better.

Christians who believe in MAGA are burdened by the history of US court cases and amendments that marginalised God and Christian ethics, most notably the 1954 Johnson Amendment, which regulates how involved religious organisation can speak on politics, and the 1973 Roe v Wade case that legalised abortion.

Pence’s op-ed praises Trump’s protection of religion and remembers attacks from Barack Obama and Biden on religious liberty. It roots Trump’s policies in America’s founding and mentions “freedom of religion, freedom of speech, and the Second Amendment right to keep and bear arms”.

These Christians believe the left denigrates the past by running through history with chisel and axe in hot pursuit of unwholesome targets.

When MAGA Christians invoke history, they tend to remember the good. They emphasise the religious crusade against slavery, not Christian justifications for enslavement. When condemning historical evil, their criticisms come in small doses.

Admiring the individuals, ideas and events that made America great will move Americans towards greatness. By focusing on the negative, Americans will become harsh, judgemental, unforgiving and self-righteous.

Other Christians believe MAGA unravels hard-won progress. They want to make America lament, remembering centuries of land theft, slavery and female subordination. Today’s inequality amplifies past wrongs – and they cite voter suppression, mass incarceration or police brutality. For them, gaps in wealth, education or healthcare have historical roots. The past is not past, and its consequences do not play out in a foreign country.

Some of these Christians seem allergic to speaking fondly about history, as they don’t want to short-circuit national repentance. They believe that claiming greatness denies, dismisses or glorifies racism, sexism and exploitation. By revering historical persons who were racist, Americans will overlook present racism. Although they may admire parts of history, they emphasise critique. Neither Pence nor Biden fit this position.

A third group wants to make America better. These Christians are uncomfortable with unqualified historical praise, but they also eschew excessive critique. They emphasise two Americas: the founding reality was unequal and unjust but the founding ideal laid the groundwork for justice and equality. America’s enduring inequities and the drive for equality flow from the same source. Therefore, most historical people, institutions or documents should not be totally rejected or wholly embraced.

Biden’s op-ed comes closer to this position through the way he praises and critiques history: “As a country, we have never been perfect nor free of prejudice. We’ve never fully lived up to those ideals, but we’ve never walked away from them”.

This group of Christians lament history, but add a tempered and qualified appreciation of the past. They argue that the US will be better if Americans vocalise a deep appreciation for their deeply-flawed nation.

In Learning from the Germans, the philosopher Susan Neiman argued that Americans need to come to terms with their past. As a first step, she said: “The nation must achieve a coherent and widely accepted national narrative.” Because the “Make America great again” and “Make America lament” positions only emphasise parts of the story, they are unlikely to become the widely accepted narrative.

Americans need to bridge the polarised interpretation of history so that the push for justice and equality in the present can be a bipartisan effort. Perhaps the greatest strength of the “Make America better” positions is in how it frames the struggle ahead. National self-critique can be patriotic. Historical criticism is not a sign of disloyalty, but national maturity. A nation has come of age when it can squarely face its past.

Is America great because it removed the knee from the slave’s neck or wicked because it has knelt over the slave for centuries – or perhaps a mixture of both? This November, history will also be on the ballot.