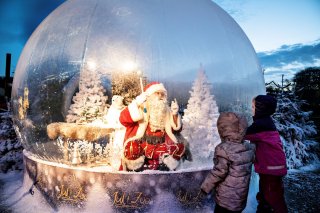 To use a phrase used more this year than I’ve had mince pies, 2020 has been unprecedented. November heralds the start of the festive season, thanks to the incoming wave of advertising, but it’s undeniable that Christmas is going to be very different.

Christmas is big business for retailers. Many rely on a good festive period to see them through well into the New Year, as strong seasonal sales can signal a promising year ahead. This is why so much stock is placed in Christmas advertising.

The approaches to Christmas 2020 in the ads released to date have something in common – they do not say the “c” word or address the pandemic too directly. Instead, they endeavour to raise our spirits with tactful humour while reassuring us that this Christmas can still be great, which is something, of course, the public is desperate to hear.

Crafting the perfect Christmas ad involves understanding the public mood, tapping into relatable themes and balancing promotion and message. Unsurprisingly, it is a challenge and the big retailers have taken this on with growing budgets to meet growing audience expectations.

Typically, advertisers have their Christmas campaigns in the bag by early September. But with all the changes and restrictions we have been through, it’s harder than ever for ad land to predict where the nation will be, come December. This may be why so many have either ignored or nodded at 2020 being a very different year.

One of the first festive ads released was from TK Maxx. Addressing the pandemic indirectly, this ad tells a quirky tale of a farmer dressing his goat in designer gear because “she’s had a really hard year”. They don’t labour the point because remember, retailers have products to sell, and depressing one’s audience isn’t going to do see things flying off the (virtual) shelves.

Advertisers know what makes people tick and use persuasive techniques to convey their message. According to marketing and psychology expert Robert Cialdini, there are six key principles to achieve this, with consistency being the first. We like brands to be consistent in what they have previously said or done, so retailers who deliver Christmas ads that are in keeping with our expectations, such as John Lewis’ masterclasses in storytelling, can expect to be received well.

John Lewis is the star on the top of the advertising tree, as the most anticipated Christmas ad of them all. The retailer has set the tone for blockbuster storytelling, throwing millions into conceiving, creating and delivering heart-warming tales that seem to belong more on the big screen than in an ad break.

For ten years, we have been treated to tales of forest animals, snowmen, penguins and monsters in a bid to demonstrate the true meaning of Christmas – doing something nice for those you love – alongside the obvious commercial undertones jostling you to do your Christmas shop with them.

Give a Little Thought

Again, their 2020 offering presents relatable scenarios and communicates the importance of acts of kindness. They advised last month that we could expect to see a step-change, to focus on charitable endeavours.

I have not been disappointed by the new John Lewis and Partners “Give a Little Love” advert. It has the expected emotional music track to drive the story on and a touching story – in fact, it has nine stories based on acts of kindness, in both a mix of live-action and stop-motion animation.

The second principle of persuasion science to highlight is the idea of consensus. This suggests that people will look to the actions and behaviours of others to determine their own, particularly when times are uncertain. And for me, this is where “Give a Little Love” falls down.

It focuses on acts of kindness, inspired by those witnessed during the first lockdown, but the characters shown travelling on public transport seem to have forgotten their face masks.

Watching ads that don’t reflect our current reality can be jarring and, at worst, affect the way we in turn behave. When the current UK government mantra is “hands, face, space”, seeing people interacting with others in close public spaces without masks or social distancing undermines this important effort. John Lewis says “together we can make a difference” – featuring characters wearing face masks would have helped achieve this.

Hats off to Amazon for including someone in a face mask in their story of a ballerina disappointed by not being able to perform but finding a way for the show to still go on.

No one could have predicted 2020 and advertisers have had a tricky job gauging the public mood and circumstances of Christmas months before. The many sticking to tried-and-tested formulas, eschewing overt mentions of coronavirus, may have successfully safeguarded sales. But it’s reasonable to expect that the public will respond more positively to retailers that have demonstrated sensitivity in their promotional storytelling.