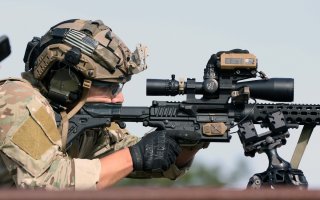 Here's What You Need to Know: Landing a shot at this distance requires not only intimate knowledge of how your weapon handles, but a rifle capable of reliably performing at that level.

Two years after being recorded, the longest sniper kill shot remains one of the greatest feats ever performed in military history.

In 2017, a sniper from Joint Task Force 2 (JTF-2) neutralized an ISIS target in Iraq at a distance of over 3,540 meters. The reported kill shot was corroborated through video footage and subsequently confirmed by Canada’s Armed Forces (CAF): “The Canadian Special Operations Command can confirm that a member of Joint Task Force 2 successfully hit a target at 3,540 metres,” read a CAF statement. “For operational security reasons and to preserve the safety of our personnel and our Coalition partners we will not discuss precise details on when and how this incident took place.”

Not just a record-breaking exercise, the JTF-2 operation had real military significance: “The shot in question actually disrupted a Daesh [Islamic State] attack on Iraqi security forces,” a source told Canadian newspaper The Globe and Mail. “Instead of dropping a bomb that could potentially kill civilians in the area, it is a very precise application of force and because it was so far way, the bad guys didn’t have a clue what was happening.”

It needs to be stressed just how difficult it is to land a shot under these circumstances. All sharpshooters must account for numerous intervening variables, including but not limited to gravity, wind speed and direction, atmospheric pressure, altitude and more—the weight of these factors can often become significantly more pronounced at greater distances. The distance at play made it particularly difficult to account for bullet drop, or the phenomenon of a fired projectile being dragged down by gravity over the course of its trajectory. Even the slightest under or over-correction through the scope could have resulted in a missed shot.

Windage poses another key difficulty: at a distance of over two miles, the snipers would have had to adjust for a distance of over 360 inches. Then there is the Coriolis Effect, which requires snipers to account for hemispheric drift. Any one of these factors requires careful attention—all of them combined make for an immensely difficult shot, which explains why updated records in this category have proven relatively rare in recent decades. Despite their powerful and highly specialized equipment, a sniper’s real professional bread and butter are the series of complex calculations that go into each shot.

Landing a shot at this distance requires not only intimate knowledge of how your weapon handles, but a rifle capable of reliably performing at that level. This latest record was, unsurprisingly, set with the McMillan Firearms Tac-50, which was used in three of the five most recent longest recorded kill shots—in all three cases, the Tac-50 was wielded by Canadian snipers. The Tac-50 revolutionized the global small arms scene following its introduction in 2000, successfully blending the reach and stopping power of an anti-materiel rifle (AMR) with the accuracy of a standard military-grade sniper rifle. The Tac-50’s .50 caliber round can hypothetically travel as far as five miles under ideal circumstances, though landing a shot at that range would prove extraordinarily difficult in real operating conditions.