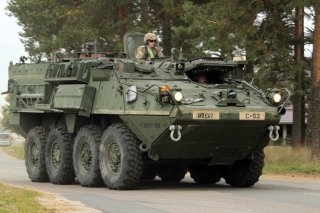 Here's What You Need To Remember: The vehicle is “the ‘Swiss Army Knife’ of combat vehicles, with a number of current and future mission equipment packages that enable expanded capabilities on an austere battlefield.”

The Stryker has been in service with the Army since the early 2000s and in that twenty or so year timeframe has undergone a number of upgrades. The initial batch of Strykers featured a pre-IED flat hull that was quickly upgraded to a blast-deflecting V-shape and was equipped with blast-mitigating seats and other upgrades.

The newest Stryker armored personnel carrier/infantry fighting vehicle is now being fielded to select U.S. Army units and will feature significant upgrades to both mobility and power generation.

In an interview with National Defense, Colonel William Venable, Army project manager for the Stryker Brigade Combat Team said that “the Stryker program is healthy,” and explained what kinds of upgrades the newest Stryker features exactly.

The DVHA1 upgrade focuses mostly on mobility and electrical power generation, which will allow for greater networking between Stryker vehicles in limited or intermittent communication scenarios. “It has got a larger horsepower engine and improvements in suspension and larger tires, giving it greater ground mobility. It has got a much larger alternator for power generation. And it’s the first vehicle that has a built-in and integrated vehicle network that will make us fully compatible with the Army’s future Integrated Tactical Network,” Venable elaborated.

In addition to upgrading the “guts” of the platform, the Army is also looking at expanding the Stryker’s firepower after studying the results of a previous lethality upgrade initiative. One Stryker variant, the Dragoon, features a 30x173mm XM813 cannon that the Army is interested in integrating onto the DVHA1 platform. The majority of Strykers currently in service with the United States are equipped with either an M2 heavy machine gun, or a 7.62 medium machine-gun and 40mm grenade launcher.

The Medium Caliber Weapons System aims to arm Strykers with a similar 30mm current-mounted cannon. Using a government-supplied XM813 cannon, six competitors are designing a Stryker turret that does not reduce the Stryker’s interior volume, can be reloaded internally, does not interfere with any top-side hatches, can accommodate Javelin anti-tank missiles, and provide better situational awareness for the driver.

Colonel Venable left no doubt as to how relevant the Stryker platform still is, stating that, “Stryker is going to be a key combat force in the U.S. Army for quite some time to come.” He explained that the Stryker is “the ‘Swiss Army Knife’ of combat vehicles, with a number of current and future mission equipment packages that enable expanded capabilities on an austere battlefield.”

In one form or another, the Stryker won’t be going anywhere soon.