40-Hour Bombing Missions? No Problem. The B-2 Bomber Is Ready. 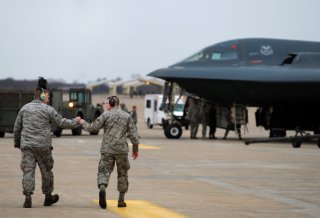 Although B-2 stealth bombers may quietly linger in climate-controlled hangars in the middle of rural Missouri farmland, these lethal planes are ready to attack at any time.

Sustained readiness, in spite of coronavirus complexities, remains a focus for the Air Force, and Defense Secretary Mark Esper, who recently visited the B-2s home at Whiteman Air Force Base (AFB), Missouri.

“We prepare and train every single day in case we get called up tomorrow,” Lieutenant Colonel Nicola Polidor, Commander of Detachment 5 of the 29th Training Systems Squadron, told TNI in an interview last year

The B-2 bomber recently passed its thirty-year anniversary and yet is, by most estimations, an entirely new aircraft when compared with its early years. The service is also moving quickly on a number of key upgrades and adjustments to the B-2 to ensure it remains viable for years to come as B-21s start to come online in larger numbers.

The B-2 is getting a new computer with 1,000-times the processing speed, a new air-defense-detecting Defensive Management System (DMS) sensor, remodeled B-61 Mod 12 nuclear bomb and reconfigured electronics in order to help the decades-old platform perform against the most modern air defenses in the world. The hope with the new DMS sensor is that even if a stealthy B-2 might be somewhat more detectable to newer air defenses, it will nonetheless be able to know where air defenses are and so could evade them.

Polidor, who regularly trains future pilots while in the air in B-2 bombers, explained how pilots at Whiteman AFB, Mississippi, routinely conduct readiness missions to ensure that the aircraft, and its crew members, remain poised to strike should they be called upon.

Part of the glass cockpit in front of the pilot is one of eight displays called the Digital Entry Panel, which enables pilots to check hydraulics, electronics, flight controls, environmental conditions, weapons suite.

“It is like a flying computer. You enter text into the computer. We can input the pressure, airspeed or target for a weapon from that panel and send it,” Polidor said. “We have autopilot just like a commercial airliner. We are able to maintain altitude without our having to input into the computer system.”

Despite flying more than forty-hour missions, pilots have no bed and no refrigerator, just two seats in a small cockpit and a small area behind them about the same width as the seat. Pilot’s food, Polidor said, needs to be non-perishable items.