41 Years Ago, a B-52 Bomber Nearly Rained Radiation on America 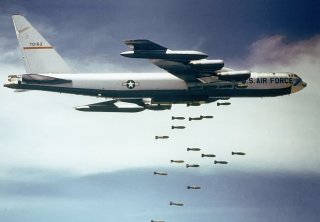 As the U.S. and Russia develop a new generation of nuclear missiles, the winds of a new arms race blow ominously.

But in 1980, it was another wind that saved the United States from nuclear catastrophe.

On the night of September 15, 1980, a B-52 at Grand Forks Air Force Base, North Dakota, caught fire. A blaze in a jet’s wing fuel tank would have been serious enough. But when an aircraft carries nuclear weapons, the consequences could be more than deadly.

“Had the wind shifted, a fire that raged for three hours on a B-52 bomber at the Air Force base near Grand Forks, N.D., would have reached the plane`s thermonuclear weapons and touched off the conventional explosives inside them,” according to a 1991 Knight-Ridder article.

A nuclear weapons expert told a Senate committee that “the resulting blast would have blown particles of radioactive plutonium over a 60-square-mile area of North Dakota and Minnesota. Many of the 75,000 people living within 20 miles of the air base could have been exposed.”

Roger Batzel, who headed a nuclear weapon lab, told the committee “that if the stiff 26-mile per hour wind had blown the fire into the B-52`s bomb bay, instead of away from it, it would have detonated conventional explosives in the triggering mechanism of the bombs,” according to Knight-Ridder. “Although a thermonuclear blast would not have occurred, the explosion would have blown the plutonium into microscopic bits and thrown it into the atmosphere to drift downwind.”

“'You are talking about something that in one respect could be probably worse than Chernobyl,'' Batzel said.

Though not officially confirmed, the B-52 was probably carrying a Short-Range Attack Missile, or SRAM. A nuclear-tipped standoff weapon designed to destroy Soviet air defenses and enable bombers to reach their targets, the SRAM was carried by B-52s, B-1s and FB-111s beginning in the early 1970s. It was withdrawn from service in 1990 after investigators, probing the 1980 incident, concluded that a fire could set off the conventional explosives in the SRAM. While this would not have triggered a nuclear detonation, it would have scattered plutonium, one of the most toxic of substances. Ingesting even a few particles can be fatal to humans, while soil would be irradiated by dust with a half-life of 24,000 years.

Ironically, perhaps the most compelling account of the Grand Forks incident isn’t in the official investigation. It can be found in a claim filed by a survivor with the Veterans Administration.

After being initially denied VA benefits for PTSD, the unnamed veteran – apparently an Air Force security policeman stationed at Grand Forks -- appealed the decision. According to the VA appeals board, “the Veteran contends in a February 1994 statement that he observed a B-52 aircraft on fire, and was ordered to get the pilots whose KC-135 fueling tanker aircraft were near the burning B-52 to ‘get [the tankers] out of [the] area or shoot to kill our own men [who were ordered to move the tankers away from the burning B-52 aircraft]....I still see the burning B-52 bring orange flame....I still hear 'hard line' in [the] fire team [building, and] a voice ordering 'shoot to kill' pilots, KC-135 crews; we were pulling them off the fence [of the base] by hand.  They would prefer to go through barbed wire, razor tape and Constantine wire than face imminent death by jet fuel and TNT explosions emitted by [the] burning B-52.’”

The VA appeals board awarded benefits to the veteran on the grounds that “it is clearly facially reasonable to fear death when faced with an aircraft carrying nuclear weapons that catches fire.”