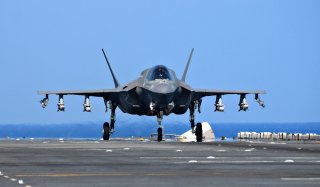 Here's What You Need to Remember: According to fresh estimates, the F-35 jet is now not only cheaper than leading U.S. fourth-generation fighters at around $77.5 million, but significantly cheaper than competing allied models like the EU’s Eurofighter.

It has now been just over five years since the introduction of the F-35 Lightning II. Despite its rocky start, Lockheed Martin’s fifth-generation stealth fighter has weathered no shortage of setbacks and pointed criticisms to carve out a niche for itself in the U.S. military.

There are five reasons why the F-35 aircraft remains one of the world’s top fighter jets.

The term “operational versatility” is nothing if not overused in the defense commentary sphere, but the F-35 jet is one such case where it is fully warranted. The F-35 jet is designed for several different configurations to fulfill a wide range of mission types. The “stealth” configuration contains four AIM-120 AMRAAM missiles for air-to-air missions, or a mixture of four AIM-120’s/GBU-31 JDAM “smart bombs” for air-to-ground missions, all loaded into the F-35 jet’s internal armaments bay to minimize radar-cross section. Then there is “beast mode,” which offers fourteen AIM-120 missiles and two AIM-9X missiles for air missions, or six GBU-31’s along with four AIM-120’s/9X’s for ground missions, stored in a combination of external and internal bays. As the name implies, “beast mode” sacrifices stealth performance for the maximum possible firepower that the F-35 jet can deliver.

Called a “quarterback” in the sky by one of its demonstration pilots, the F-35 jet’s myriad onboard sensors are capable of generating a real-time picture of the battlefield. The F-35 jet can then feed this live information to nearby friendly units and operation centers, contributing to a shared data network generated from first-hand information. The F-35 jet is, in this way, a force multiplier: it can enhance the capabilities of friendly air, ground, and surface units by utilizing its advanced sensor suite to provide information that they wouldn’t have access to otherwise.

The F-35 jet boasts an airframe specially designed to generate a minimal radar-cross section, also coated in radar-absorbent materials. The F-35 jet is generally thought to be stealthier than Lockheed’s F-22 Raptor—arguably the gold standard for fifth-generation stealth performance—from the front, offering an RCS so low that it is often compared to that of a metal golf ball. This makes the F-35 jet an apt choice for penetration missions deep into enemy airspace.

The F-35 jet boasts an AN/APG-81 system active electronically scanned array (AESA) radar, boasting powerful electronic countermeasures capability. The APG-81 is capable of tracking multiple moving targets at over 150 kilometers and rigorous mapping, as well as offering unique profiles for different mission modes. Meanwhile, the AN/ASQ-239 countermeasures suite brings a radar warning receiver, jamming capabilities, as well as rapid response and situational awareness features. These are just two examples from what is one of the most cutting-edge avionics packages ever installed onto a stealth fighter.

The leading objection to the F-35 jet has inarguably been the program’s colossal costs over the years. While costs remain a concern, there is some good news: the first F-35 jets are fully equipped and already seeing combat deployments, while costs per model have dropped significantly in recent years. According to fresh estimates, the F-35 jet is now not only cheaper than leading U.S. fourth-generation fighters at around $77.5 million, but significantly cheaper than competing allied models like the EU’s Eurofighter. What does all this mean? Not only is the U.S. government getting a better deal but the F-35 jet can more capably compete as an export product.