5 Weapons that Japan Must Develop to Defend Itself 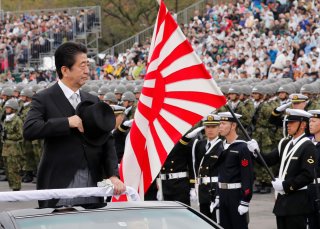 Here's What You Need to Remember: Recent events in Northeast Asia have propelled Japan’s neighborhood from a security backwater to one of the world’s most dangerous flashpoints. The rise of China and Russia’s muscular posturing has exposed Japan’s security establishment as dangerously complacent.

Since the end of the Cold War, Japan’s security structure has been largely unchanged. The Defense Agency was uplifted to full ministerial status, and a layered missile defense was erected to counter North Korean ballistic missiles, but by and large the posture and composition of Japan’s Self Defense Forces was preserved.

Caught flat footed by Chinese assertiveness in the East China Sea and Russian military flights near its borders, the government of Prime Minister Shinzo Abe has implemented a raft of security improvements, from secrecy laws to the creation of a national security council modeled off the one that serves the U.S. President.

An anemic economy has kept Japan’s defense spending flat or falling for two decades. According to a study by the Mizuho Bank, the Ministry of Defense’s acquisition budget fell 38 percent between 1990 and 2013. The number is roughly proportional to the amount of GDP the Japanese economy has lost during the same period.

If Japan’s self-defense forces are to properly counter modern threats, they will need the right tools to do the job. Here are five weapons that Japan needs immediately.

The land-based equivalent of the Aegis Combat System, Aegis Ashore was developed for deployment to Eastern Europe as part of a regional ballistic missile shield. Combining the advanced SPY-1D radar with surface to air missiles, Aegis Ashore can dominate airspace within hundreds of miles of its deployment site.

Japan has expressed interest in Aegis Ashore, fearing that its current fleet of six ballistic missile-defense capable Aegis destroyers could not stand up to a sustained barrage of theater ballistic missiles, of which both China and North Korea have large inventories of.

Japan would use Aegis Ashore to protect major population centers, particularly those in the Kanto, Kansai, Chugoku and Kyushu regions. The combination of the SPY-1D radar with SM-3 Block IB ballistic missile interceptors would be just as effective as Japan’s destroyers, with the added bonus of being able to station more missiles on land. This would solve the “sustained barrage” dilemma.

Another more creative use for Aegis Ashore would be to deploy it in the Ryukyu Islands, where they would be able to watch over the nearby Senkaku Islands (Diaoyu Islands to the Chinese.) This would give Japan the ability to close the airspace over the islands whenever it wished, and make it very dangerous for China to use military aircraft to push its territorial claims.

Since the Second World War, Japan has had a self-imposed ban on so-called “marines,” amphibious-trained infantry capable of conducting landings by air and sea. Marines have long been considered offensive weapons and thus against the spirit of Japan’s pacifist constitution.

The ban has always been a policy matter, however, and Japan’s government has decided that marines trained to quickly garrison territory or take it back from an enemy are allowable. Such marines are considered defensive in nature.

Starting in the early 2000s, the Ground Self Defense Forces began exercising with the United States Marine Corps in the biennial “Iron Fist” amphibious training exercises. The exercises, held at Camp Pendleton, California, have trained a nucleus of Japanese ground troops in amphibious operations.

Japan has announced the creation of a marine brigade, built around the battalion-sized Western Army Infantry Regiment. The brigade is to be stationed in Sasebo, Nagasaki, where it will be co-located with sealift provided by the Maritime Self Defense Force.

A second amphibious brigade, based farther north on the island of Hokkaido, would expand Japan’s capability to respond to crises. As the deaths of Japanese hostages in Algeria in 2013 and Syria in 2015 demonstrate, Japan needs the ability to protect its citizens abroad. A battalion-sized force modeled on the U.S. Marine Corps’ Marine Expeditionary Unit would give Japan the ability to evacuate civilians from conflict zones.

Now that Japan actually has dedicated amphibious troops, it is time for a real “gator” fleet to carry them. A force of three landing helicopter dock (LHD) ships similar to the American Wasp and Australian Canberra-class as well as three LSTs to replace the Osumi-class would give Japan the ability to put an marine battalion at sea at any given time.

An LHD-type ship, incorporating a full-length flight deck, hangar and well deck is easily within Japan’s shipbuilding expertise — such a ship would merely be a melding of the existing Izumo class helicopter destroyer and the Osumi-class.

The LHD design would almost certainly embark a detachment of Japan’s V-22 Osprey tilt-rotor aircraft, giving it the ability to land troops by air. A large enough design could even, like the Wasp class, embark a small number of F-35B Joint Strike Fighters.

Backing up the LHD ships would be an LST design capable of carrying Japanese AAV-7A1 amphibious assault vehicles in the well deck, the first of an anticipated 52 of which have already arrived in Japan. The LST could also carry a range of heavier vehicles to shore via hovercraft, including the Type 89 infantry fighting vehicle and the Type 10 main battle tank.

Like an American Amphibious Ready Group, a Japanese ARG would be a “Swiss army knife” for Japanese policymakers, capable of conducting a wide range of missions. It could be used to defend the Senkaku Islands, conduct presence missions in the Ryukyus, engage in peacekeeping and stability operations across Asia and the Pacific, and participate in humanitarian assistance/disaster relief missions in the wake of regional disasters.

The People’s Liberation Army Navy — much to Japan’s irritation — has made a point in recent years of sending naval task forces through the Miyako Strait—a passage in the Ryukyu chain between Miyako Island and Okinawa.

Despite Japan’s peacetime irritation, the fact that Japan owns both sides of the strait gives it a strong defensive position. In the event of war, Japan could close the Miyako Strait to the PLAN with a combination of attack submarines and small surface combatants.

A small, stealthy surface combatant, utilizing stealth and the numerous islands of the Senkaku and Ryukyu Island chains to mask its position, could lay mines and execute ambushes on its own and in concert with Japanese submarines and fixed wing aircraft.

A small, highly organized force of such combatants would confer a high level of uncertainty to any Chinese admiral attempting to force the strait in wartime. An example of the type of ship is the Swedish Visby-class corvette. Displacing a mere 640 tons, each Visby carries one 57mm gun, eight RBS-15 anti-ship missiles, four torpedoes, depth charges and mines.

Front-line air superiority fighters are something that Japan doesn’t skimp on. There’s a good reason for this: during World War II, once air superiority was lost over the Home Islands, Japan’s cities burned to the ground.

Japan purchased roughly 200 F-15J and two-seater DJ fighters during the 1980s. It expected to replace them in the 2000s with the F-22 Raptor. Unfortunately for Japan, the so-called Obey Amendment passed by the American Congress in 1998 prohibits the export of the F-22 abroad.

This has left Japan with a force of aging F-15J Eagles and no immediate prospect for replacing them. The upcoming ATD-X could provide a suitable replacement fighter in the long term but is still in the technology demonstration phase. In the meantime, Japan has embarked on a series of upgrades of its fighter fleet.

The upgraded F-15Js will also carry the new AAM-4B air to air missile, Japan’s replacement for the AIM-7 Sparrow and one of the few missiles of its kind to have an active electronically scanned array (AESA) radar seeker.

Japan’s fleet of indigenous F-2 fighters is receiving even more substantial upgrades to their air-to-air capability in the form of nose-mounted AESA radars. F-2s are also being upgraded to carry the AAM-4B and JDAM GPS-guided bombs.

Kyle Mizokami is a writer based in San Francisco who has appeared in The Diplomat, Foreign Policy, War is Boring and The Daily Beast. In 2009 he cofounded the defense and security blog Japan Security Watch. You can follow him on Twitter: @KyleMizokami. This article is being republished due to reader interest.