$50,000 Student Loan Debt Forgiven? This Senator Wants Biden to Do It. 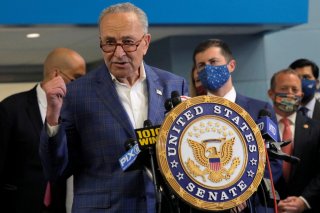 “With the flick of a pen, President Biden could get it done and I promise that I’ll keep pushing the Biden administration to do it,” he said at a virtual panel for the Brookings Institution.

The majority leader also said that the proposal would largely benefit low-income and minority borrowers who have been severely impacted by the financial burdens of student loan debt.

“That means a new life for millions upon millions of students, particularly low-income and diverse student loan borrowers crushed by the weight of the debt,” he said.

Biden hasn’t signaled whether he would forgive student loan debt by executive action, though he did instruct Education Secretary Miguel Cardona to draft a report that outlines the president’s legal authority to cancel up to $50,000 in student debt per borrower.

Roughly 43 million Americans owe a collective $1.59 trillion in federal student loan debt, and if Schumer’s proposal ever passed, that would wipe out all existing student debt for nearly 83.7 percent of them, according to an analysis by the Department of Education.

“Our action today will give thousands of borrowers a fresh start and the relief they deserve after ITT repeatedly lied to them,” Cardona previously said in a statement. “Today’s action is part of the Biden-Harris Administration’s continued commitment to stand up for borrowers when their institutions take advantage of them. Many of these borrowers have waited a long time for relief, and we need to work swiftly to render decisions for those whose claims are still pending. This work also emphasizes the need for ongoing accountability so that institutions will never be able to commit this kind of widespread deception again.”