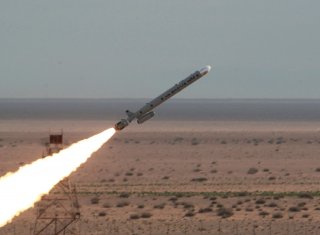 Key Point: Iran is no stranger to making threats. However, it also knows there are some lines is might be unwise to cross.

Iranian forces on Jan. 7, 2020 fired over a dozen ballistic missiles at two Iraqi bases, inflicting some damage but reportedly killing no one.

The rockets Iran fired in retaliation destroyed structures at Al Asad airbase west of Baghdad and also struck a base in Erbil in northern Iraq that hosts U.S. Special Operations Forces and diplomats.

It appears Tehran launched some of its smaller missiles for the January 2020 strikes. Iran possesses much larger rockets that possess greater range and payload and eventually could carry nuclear warheads.

Iran apparently does not possess a rocket that can strike the United States from Iranian soil.

Jeffrey Lewis, a missile expert at the Middlebury Institute of International Studies at Monterey, studied photos of wreckage from the January 2020 strikes and concluded that the rockets involved in the attacks likely were Qiams.

“The most noticeable modification is the Qiam-1’s lack of tail fins, which suggests the missile is equipped with an improved guidance system that can more quickly detect and correct changes in its trajectory, removing the need for stabilizing fins in boost phase,” the Washington, D.C. Center for Strategic and International Studies reported.

The Sejjil by contrast is a purely Iranian design. Along with other advancements, it packs a warhead as heavy as 2,200 pounds. “Its use of solid propellant, in particular, is due to fuel technology advancement made in conjunction with the Zelzal program during the 1990s, the development of which is believed to have been aided by China,” CSIS explained.

Though the missile has a similar size, weight, and range to the Shahab-3 variants, its use of solid-propellants is a major improvement on the Shahab design. Solid propellants allow for a near-immediate launch time, leaving the missile much less vulnerable during launch.

Sejjil could be a leading candidate to carry atomic warheads, if and when Iran develops them. But the rocket’s development apparently is incomplete.

“Because the design is new, Iran will probably have to subject it to a great deal of testing before putting the missile into regular operation,” CSIS stated.

“Assuming that the Sejjil project moves at about the same speed as foreign missile development projects, Iran could not have declared the missile operational until at least 2012. However, this still has not formally occurred, despite putting the missile on public display during a parade alongside the Shahab-3 and Ghadr-1. The missile has not been tested since 2012, leaving  its deployment status uncertain.”

David Axe serves as Defense Editor of the National Interest. He is the author of the graphic novels  War Fix, War Is Boring and Machete Squad. This first appeared earlier in 2020 and is being reposted due to reader interest.