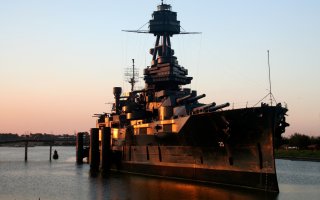 France had the ambition and sufficient resources to undertake a major naval modernization in the late 1930s. First came the Dunkerque class, a pair of excellent light battleships armed with eight 13” guns. The French followed this up with what were expected to be the four ships of the Richelieu-class. Displacing 43,000 tons and armed with eight 15” guns, these ships were fast and exceedingly well-armored. The last two ships would have been built to a significantly different design, but in any event, only the first two were completed. France intended to build four additional ships of the Alsace class, likely displacing 46,000 tons and carrying nine 15” guns in a traditional three-turret arrangement. This would have given France a battle squadron of ten modern, fast ships by the late 1940s.

Italy adopted a similar strategy to that of Japan and the United Kingdom, upgrading older battleships with higher speeds in order to allow them to participate in the modern battlefleet. Three Cavour and two Andrew Doria class battleships, all veterans of World War I, would have remained in service in 1950 after massive reconstructions in the 1930s. These ships would have been led by the four new ships of the Littorio class, three of which served during World War II. Displacing some 45,000 tons, the Littorios could make 31 knots and carried nine 15” guns in three triple turrets. Italy’s nine-ship battlefleet would have operated primarily in the central Mediterranean.

That’s a lot of battleships. With its immense resources and industrial capacity, the United States would have become the world’s premier battleship power, followed by the Royal Navy. The other major powers would have been limited by geography and economics, although both the Germans and the Japanese could likely have held their own for a while. The future of the battleship beyond 1950 would have depended to great extent on how the great navies incorporated new technologies, in particular, the jet aircraft and the anti-ship missile, into their war planning, and on what opportunities they had to develop experience with new kinds of warship.