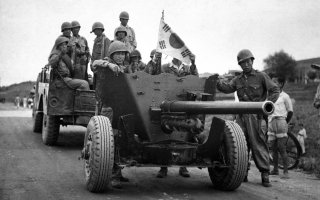 Did the United States Intend to Invade China?

Chinese Communists had long feared Korea would serve as a springboard ground for an American invasion of China. After all, the United States had supported the Chinese Nationalists, who relocated their government to Taiwan after being driven from the mainland. Communist and Nationalist forces were still actively fighting on several fronts, including coastal islands and even the jungles bordering Myanmar. This, along with ideological sympathy for Korean communists, motivated Chinese support for the North Korean invasion of the South.

A few months later, Beijing was not reassured to see an American-led international army barreling toward its borders with Korea. Indeed, MacArthur privately voiced his support for expanding the war into China, believing he could easily defeat the People’s Liberation Army if only he were given the resources to fight them.

However, MacArthur’s views and resulting recklessness with regard to China ran contrary to his instructions from President Truman, who eventually relieved the popular general of command. However, the Chinese intervention did lead Truman to divert the U.S. Seventh Fleet to support the Chinese Nationalists, who had fled to islands off of China, solidifying their formerly precarious position from PLA amphibious assaults.

Was the Korean War Really about Japan?

A Chinese student of mine once argued in an essay that the Korean War had been a means for the United States to revitalize the Japanese economy, then under American occupation. Indeed, the United States injected $3.5 billion into the Japanese economy to supply its forces in Korea, resulting in a doubling of Japan’s economic output. By the end of the Korean War, the island nation had been restored to its pre–World War II standard of living.

While casting U.S. intervention in the Korean War as particularly bloody economic stimulus package misrepresents the diplomatic stakes in play, it does catch on to an aspect of American strategy in Asia at the time, which was to build up Japan as a bulwark against communist expansion. A more measured analysis might be that U.S. intervention in Korea was motivated by a fear it would give communist forces a secure foothold to expand into Japan.

This does not change a simple truth: the Korean War was the result of a deliberate and premeditated decision by North Korea and the Soviet Union to invade South Korea.

Yes, Syngman Rhee’s government in South Korea was bellicose, undemocratic and responsible for many human-rights violations—but it did not actually assemble an army for an invasion of the North, which was also quite repressive.

Yes, the United States was responsible for sending its forces across the thirty-eighth parallel and eventually waging a bombing campaign that killed many North Korean civilians.

However, the American military buildup in Korea, the advance on the Yalu River and the bombings were consequences stemming from a North Korean invasion that had been prepared for well in advance.