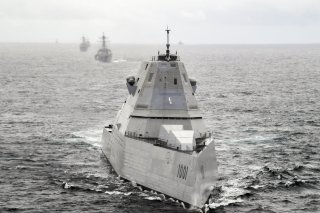 Key Point: The U.S. Navy is transforming its Zumwalt-class land-attack destroyers into surface-warfare ships whose main mission will be sinking other vessels at sea. In swapping the job of the three-ship class, the Navy is admitting that its original concept for the 600-foot, stealthy warships is no longer viable.

“We see an opportunity with this ship, with its ability to carry the weapons it can carry and the types of design we put into it for signature control, that we think is a very good platform to be used forward as a surface-strike platform,” said Rear Adm. Ron Boxall, the sailing branch’s director of surface warfare.

The mission-change, first reported by the news website of the U.S. Naval Institute in early December, came as Michael Monsoor, the second ship in the class after Zumwalt, set sail for builder’s trials off the coast of Maine. The third ship in the class, Lyndon B. Johnson, is under construction.

When the Navy originally wrote the Zumwalt class’s requirements in the mid-1990s, the focus was on shore bombardment. The Zumwalts — the Navy once planned to buy 32 of the ships — would use their two 155-millimeter cannons and high-tech guided shells to precisely bombard enemy forces in advance of an amphibious assault. The Zumwalts also carry up to 80 missiles in vertical launch cells.

Costs rose. Today each Zumwalt sets back U.S. taxpayers no less than $4 billion, including development costs. Balking at the price tag, in 2008 the Navy cut back the program to just three ships and, as a replacement, restarted production of Arleigh Burke-class destroyers.

Meanwhile the Zumwalts’ GPS-guided ammunition suffered its own cost inflation. By 2016 the cost of a single Long Range Land Attack Projectile had risen to around $1 million, as much as a Tomahawk cruise missile. In December 2016 the sea service ended LRLAP production at just 90 copies, leaving the destroyers with no shells for their special guns. The Navy is still searching for replacement ammo.

At the end of 2017, the Zumwalts were virtual orphans in the fleet. Too few for widespread integration into the Navy’s main force structure and lacking weaponry, the ships lacked a clear purpose. Boxall’s announcement could change that. But it’s unclear what modifications the Navy will make the three destroyers to optimize them for anti-ship operations.

The Zumwalts’ stealth qualities could be an asset. The destroyers’ smooth, angular shapes help to minimize their radar signatures, potentially helping them to get closer to enemy forces than a non-stealthy ship could do. But to remain elusive, the Zumwalts must sail alone — the presence of a conventional warship in the same battle group could act as a sort of beacon.

And that poses a difficult question. To save money, the Navy removed high-end air-defense systems from the Zumwalts. Lacking the Aegis radar system and Standard missiles, the destroyers rely on short-range Sea Sparrow missiles for self-defense. The Zumwalts’ stealth demands they operate alone. But their limited surface-to-air missile armament practically begs for the Navy to assign Burkes or other vessels as escorts.

At least when it comes to surface-to-surface weaponry, the Zumwalts should have options. The Navy is developing several new anti-ship missiles, including the stealthy Long-Range Anti-Ship Missile and a new variant of the Tomahawk. Both weapons are compatible with the Zumwalts’ vertical launch cells.