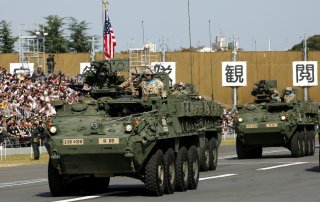 Here’s What You Need to Remember: Deploying the SHORAD-capable Strykers in Europe represents the first increment in a three-fold process to evolve the capability for the vehicles. The second increment involves arming the Stryker with a fifty-kilowatt laser weapon, an effort that is progressing quickly with the Army and its defense industry partners.

The Army’s first anti-drone, missile-armed Stryker vehicles have arrived in Europe and are ready for combat. This is a first step for the Army’s Short Range Air Defense (SHORAD) program, which will bring air-defense operational reality to Army Stryker maneuver formations.

The M-SHORAD program, which arms Strykers with AGM-114 Hellfire and FIM-92 Stinger missiles, will prioritize a Cold War-era air defense plan to counter advancing infantry formations that have “atrophied” or disappeared during years of counterinsurgency when there was no air threat.

Maj. Gen. Brian Gibson, the director of the Air & Missile Defense Cross-Functional Team for Army Futures Command, referred to the first equipped unit as a “milestone” effort. That is because a Stryker vehicle with the ability to fire Hellfire and Stinger missiles can track, target and destroy drones, helicopters and low-flying fixed-wing aircraft. Advancing infantry units can be protected in unprecedented ways since the advent of the Stryker more than twenty years ago. Mobile Strykers armed with anti-aircraft weapons are particularly relevant to the United States and its allies, which could demonstrate an ability to quickly deploy troops on the European continent and across the region. Additionally, they could conduct expeditionary operations in response to Russian activity in contested or high-tension areas in Eastern Europe.

Deploying the SHORAD-capable Strykers in Europe represents the first increment in a three-fold process to evolve the capability for the vehicles. The second increment involves arming the Stryker with a fifty-kilowatt laser weapon, an effort that is progressing quickly with the Army and its defense industry partners. This will introduce a new sphere of silent, high-speed precision attacks against enemy air assets or even incoming munitions such as missiles, rockets or artillery.

Army futurists and weapons developers are beginning early conceptual work on the third increment, which is a yet-to-be-determined effort to bring paradigm-shifting anti-air weapons to the SHORAD program, due to recent progress with the second increment.

“It might be easiest to put a new missile in the same form factor, however, technology may provide you with a much greater capability,” Gibson said. “We have every intent to see ourselves and find out what the realm of the possible is. We should understand the art of the possible by putting as many arrows into our quiver as possible. We remain committed to prototyping as quickly as we can without locking down too quickly.”