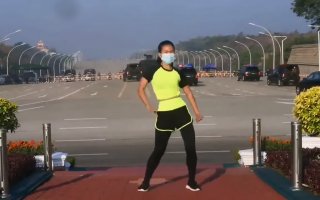 An aerobics instructor filming her exercise routine accidentally caught the beginning of a military coup in Myanmar earlier this week. The video shows a convoy of black military vehicles headed for the parliament complex in Nay Pyi Taw, Myanmar’s capital city, as she goes about her workout.

The footage shows fitness instructor Khing Hnin Wai working through an aerobic routine as more than a dozen blacked-out SUVs and armored vehicles approach a roadblock behind her. Those vehicles reportedly carried troops who went on to capture Aung San Suu Kyi, the democratically elected State Counsellor of Myanmar, as well as other members of the nation’s elected government.

In an ironic twist, the music playing in the background of Khing’s video includes lyrics that translate to, “They are coming, one by one, to fight over the throne.”

Initially, many online assumed this video was a fake, since the framing of the dance and the convoy’s appearance behind Khing seems more like an SNL skit than the serious military coup that’s taking place. Khing has continued to post on social media about the video, and was contacted by The BBC in order to confirm the validity of her video.

“I wasn’t dancing to mock or ridicule any organization or to be silly. I was dancing for a fitness dance competition,” wrote Khing on her Facebook. “As it isn’t uncommon for Nay Pyi Taw to have an official convoy, I thought it was normal so I continued.”

What is happening in Myanmar?

The military of Myanmar has taken over the country and declared a year-long state of emergency following an election that saw Suu Kyi win in a landslide. The military is demanding a repeat of the election, citing unconfirmed reports of “widespread voter fraud.”

Suu Kyi first garnered international attention in the 1980s as she campaigned for her nation to restore democratic rule. After organizing protests and rallies that called for free democratic elections, she was captured and held in detention from 1989 until her release in 2010. Suu Kyi was awarded the Nobel Peace Prize in 1991, which she accepted while serving a portion of her sentence under house arrest.

In 2015, Suu Kyi helped her National League for Democracy party secure victory in the nation’s first open elections in a quarter-century, propelling the former captive into the role of State Counsellor, a role similar to that of Prime Minister in other nations. Not all of Suu Kyi’s media exposure has been positive, however, as many cite Myanmar’s policy of treating the nation’s Rohingya minority group as illegal immigrants when criticizing Suu Kyi. Allegations of a military-led genocide of the Rohingya people forced Suu Kyi to answer for her nation’s actions at the International Court of Justice in 2019, though she denied any wrongdoing.

While there are no hard figures on how many Rohingya people have been killed, an estimated 700,000 have fled Myanmar to Bangladesh since the military crackdown began in 2017.

Now, according to Myanmar’s military, control of the nation has been handed over to Min Aung Hlaing, who serves as the commander and chief for the nation’s forces. The European Union, UK, and United Nations have all already condemned the military takeover of Myanmar, and President Joe Biden has already threatened to restore previously ended sanctions on the nation.

Protests have reportedly erupted around the nation, with many citizens honking their car horns or taking to the street to bang on pots and pans to voice their displeasure with the military take-over.

“The curse of the coup is rooted in our country, and this is the reason why our country still remains poor. I feel sad and upset for our fellow citizens and for their future,” Suu Kyi told the press.