In Afghanistan, Russia’s Su-17 Proved to Be an All-Role Fighter 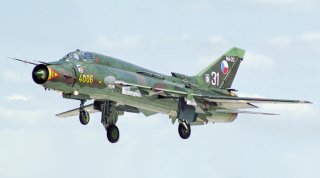 Here's What You Need to Remember: The Su-17 saw significant service in the Soviet war in Afghanistan. It served in many roles during that conflict, including reconnaissance, strike, and minelaying. Combat experience in this conflict led to the fitting of chaff and flare dispensers and additional armor to the aircraft.