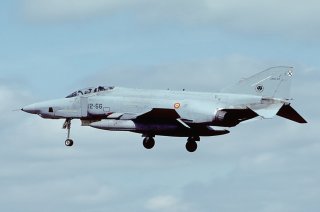 Here's What You Need to Remember: By the time F-4 serial production ended in 1979, a whopping 5,195 models had been built. The F-4 began to be gradually phased out with the 1970’s introduction of the F-15 for the Air Force and F-14 for the Navy, being officially retired in 1996. But the fighter continues to fly across the world: Israel, Turkey, South Korea, Japan, Greece, and Iran still operate large numbers of F-4’s.

An iconic U.S. fighter of the Vietnam War era, the McDonnell Douglas F-4 Phantom II manages to trade performance blows with some fourth-generation fighters and remains in service with militaries across the world.

The F-4 has its roots in 1950’s efforts by McDonnell Aircraft Corporation to design a new attack fighter for the U.S. Navy. Following two concept demonstrators, the F-4 entered serial production in 1961. Originally a carrier-based interceptor, the F-4 later made its way to the Air Force as part of Defense Secretary Robert McNamara’s effort to streamline the naval and air force aircraft rosters.

There is no way around the fact that—as noted by no shortage of observers—the F-4 is a strikingly ugly fighter, earning such unflattering nicknames as the “Big Iron Sled” and “Flying Brick” over its long tenure. To be sure, there are some obvious engineering justifications behind the F-4’s design; the protruding nose, for instance, contains an upgraded AN/APQ-120 radar array. Meanwhile, its oddly upturned wings are a pre-production correction made to eliminate potential instability at high sustained speeds. The fighter was powered by massive twin J79 twin engines, providing superb thrust and enabling a prodigious 8,400 kg payload spread across nine external hardpoints.

Design qualms notwithstanding, the F-4 proceeded to break numerous speed records that would be beaten only with the introduction of the F-15 some decades later. Serial F-4 units managed to reach speeds of up to Mach 2.2. The F-4 wasn’t particularly agile, nor was it meant to be—it largely served in an interceptor role, whereas the F-8 Crusader was the Navy’s preferred air superiority fighter.

Despite the many aspects of its design that were undoubtedly cutting-edge, the F-4 saw a checkered combat record in the Vietnam war. The chief problem stemmed from its lack of an integrated cannon, forcing it to rely on a newly-introduced and problem-ridden coterie of air-to-air missiles. The initial AIM-7 and AIM-9 iterations suffered from an abysmal failure rate, with roughly half of both missiles failing to launch or lock on. After accounting for countermeasures and evasive maneuvers, their actual kill rate couldn’t exceed 20% even under the most generous estimates. These shortcomings were addressed, or at least mitigated, with later weapons revisions such as the AIM-7E-2. Meanwhile, the popular F-4E variant finally introduced a M61 Vulcan internal cannon. With these modifications, the F-4 grew out of a pure interceptor into something approximating a multi-role fighter—later F-4’s ran everything from suppression to reconnaissance missions.

By the time F-4 serial production ended in 1979, a whopping 5,195 models had been built. The F-4 began to be gradually phased out with the 1970’s introduction of the F-15 for the Air Force and F-14 for the Navy, being officially retired in 1996. But the fighter continues to fly across the world: Israel, Turkey, South Korea, Japan, Greece, and Iran still operate large numbers of F-4’s. With the exception of South Korea, these models were significantly modified to fit the importer’s use case.

In spite of its rough start, the F-4 leveraged its impressive specifications and a slew of common-sense improvements to become one of the most flexible and prolific fighters of its time.

Mark Episkopos is the new national security reporter for the National Interest. This article first appeared last month and is being republished due to reader interest.