After Sinking Billions Into Its Stealth Destroyers, The Navy Needs More Money To Keep Them Afloat 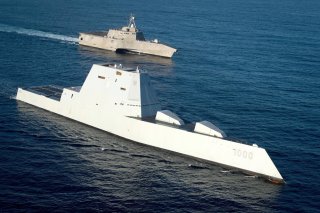 Here's What You Need To Remember: The cost of the current upgrades is reportedly $90 million—a sum which may prove worthwhile if it helps recoup some value after the $22 billion sunk into the ambitious but failed ship concept.