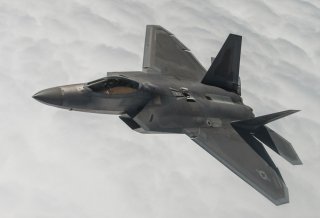 Here's What You Need To Remember: Also, perhaps the faster-than-expected development of a sixth-generation aircraft is in part intended to address the problems that there are insufficient numbers of F-22s in the fleet. The air-to-air dominance, continued upgrades and combat performance of the F-22 led many senior Air Force leaders to argue in favor of re-starting F-22 production.

Now that the Air Force has officially “flown” a sixth-generation stealth fighter, many might wonder what this means in terms of when the aircraft might actually arrive?

Since several of the artistic renderings of the plane show an absence of tail fins or any vertical structures, perhaps sixth-generation aircraft will be stealthier? Perhaps it will be faster and more maneuverable than its fifth-generation predecessors? These could truly be crucial attributes given well documented rapid advances in enemy air defenses.

The other, potentially less recognized element of this is simply that a sixth-generation aircraft will be expected to complement and operate alongside the F-35. Not only does the Air Force plan to acquire more than 1,700 F-35s, but the service plans to fly the aircraft well into the 2070s. Plans for this include the often referred to Air Force’s continuous development upgrade program intended for the F-35. Many of the anticipated huge breakthrough technologies are expected to be software-reliant, computer-based or related to advanced sensing and AI, therefore enabling a jet like the F-35 to make massive leaps forward in performance without needing a new airframe configuration. Lockheed engineers built the F-35 with this in mind, meaning it was technically configured to be upgradeable for decades.

For example, the F-35’s sensor fusion already encompasses early iterations of AI, given that advanced computer algorithms are able to aggregate, analyze, organize and transmit clear, integrated information to pilots. New yet-to-exist sensors and weapons configurations could be accommodated by this kind of technical infrastructure.

Stealth coating can be maintained and upgraded, weapons’ lethality and guidance systems can be upgraded with software as we have seen with both the F-35 and F-22, and engine enhancements decreasing heat emissions or increasing propulsion and maneuverability are also entirely possible as well. What this means is all the evidence points to the continued, long-term operational relevance of the F-22 and F-35. The Air Force already plans to fly the F-35 until 2070 and the F-22 all the way to 2060.

Newer networking technologies, such as radios able to connect F-22s and F-35s in stealth mode and two-way LINK 16 connectivity between the two fifth-generation platforms means secure interoperability between fifth- and sixth-generation fighters is expected, a technological scenario enabling a massive expansion in tactical warfare possibilities.

Also, perhaps the faster-than-expected development of a sixth-generation aircraft is in part intended to address the problems that there are insufficient numbers of F-22s in the fleet. The air-to-air dominance, continued upgrades and combat performance of the F-22 led many senior Air Force leaders to argue in favor of re-starting F-22 production. The decision at the time wound up being not to restart F-22 production, due to budget constraints. However, perhaps the thinking was to simply build a newer, better, even more capable F-22-like platform able to leverage and optimize several breakthrough technologies. Some of the artistic renderings or concepts of sixth-generation show a dual-engine configuration as well as other visible attributes somewhat analogous to the F-22 with things like wing shape. Could a sixth-generation fighter be an even better, newer, stealthier F-22-type aircraft? Could that at least be part of the rationale for why the F-22 production line has not been restarted in recent years?