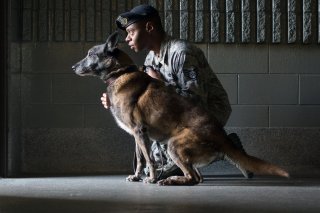 The 325th Security Forces Squadron got a Quad-Legged Unmanned Ground Vehicle (Q-UGV), as is the official title of the dog robot, to assist in base security.

Made by the tech companies Ghost Robotics and Immersive Wisdom, the robot dog is the first of its kind to become operational. Like its aircraft counterparts, the drone requires a pilot, who controls it via a PlayStation-like handset.

The robot dog can operate from minus 40 degrees to 131 degrees Fahrenheit. Its structure allows for easy navigation even in difficult terrain. It has 14 sensors that offer the pilot 360-degree situational awareness.

“As a mobile sensor platform, the Q-UGVs will significantly increase situational awareness for defenders,” Mark Shackley, the Tyndall Air Force Base Program Management Office security forces program manager, said in a press release. “They can patrol the remote areas of a base while defenders can continue to patrol and monitor other critical areas of an installation.”

Air Force Security Forces squadrons are responsible for the security and protection of Air Force bases both in the US and overseas.

The 325th Security Forces Squadron is based in Tyndall Air Force Base, Florida.

“Tyndall (AFB) is a perfect test base as it was deemed ‘The Installation of the Future,’” Master Sergeant Krystoffer Miller, the 325th Security Forces Squadron’s operations support superintendent, said.

“Across the base, every squadron has been pushing the envelope of how we do things and expanding our optics of what is possible. One huge attraction piece of the robot dogs is that it’s highly mobile and with the amount of construction we will face over the next few years, it helps us maintain and increase our security posture.”

This isn’t the first unmanned vehicle that aims to support ground troops. The Army has been experimenting for years with robots that could carry heavyweights in the roughest terrains in support of infantry and special operations troops.