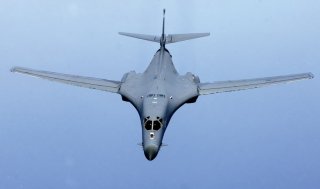 Here's What You Need to Remember: During the deployment, B-1B Lancers were the first ever to forward deploy to Norway and land in the Arctic circle and Poland.

Several B-1B Lancer and B-2 Spirit stealth bombers and over 100 support personnel flew to Europe to take part in a Bomber Task Force deployment.

Bomber Task Force deployments are probably one of the more important but least known Air Force missions. They ensure that the Air Force Global Strike Command, the organization responsible for delivering big payloads to faraway places, is ready at a moment’s notice to launch and conduct missions anywhere in the world, against any adversary and its anti-aircraft capabilities.

During the deployment, B-1B Lancers were the first ever to forward deploy to Norway and land in the Arctic circle and Poland. Additionally, they conducted the first-ever “hot-pit” refuel of a B-1B Lancer in Europe. A nomenclature taken from Formula 1, “Hot-pit” refuels refers to the fast refueling and rearming process of an aircraft in order for it to redeploy as soon as possible. They enable sustained operations even with limited aircraft.

“Looking back at everything our Airmen have accomplished in the past month is pretty incredible,” Air Force General Jeff Harrigian, the commander of U.S. Air Forces in Europe-Air Forces Africa commander, said in a press release. “This iteration of BTF demonstrated our unwavering commitment to the security and stability of Europe, provided vital opportunities to strengthen our bonds with allies and partners and allowed our Airmen to develop and refine skills that are necessary for the future success of our air operations.”

An additional value of this particular Bomber Task Force deployment is the experience and lessons learned of operating in the Arctic. As relations between the West and Russia and China continue to freeze, the Arctic becomes increasingly important as a potential future battlefield.

“Our corporate knowledge of Arctic operations in the B-1 is not as robust as it is for other regions of the world, and we fully intend to share our insights with the rest of the B-1 enterprise upon our return,” Lieutenant Colonel Andrew Marshall, the director of operations of the 345th Expeditionary Bomb Squadron, said. “The knowledge and experience we have gained can and will be leveraged for immediate and lasting effect in this community.”

As tensions in Ukraine continue to increase, this historic deployment of strategic bombers sends a message to Russia that American airpower isn’t that far away in case of a contingency.

This first appeared on Sandboxx.us in April 2021 and is being republished due to reader interest.