Air-Launched Hypersonic Missiles Are Changing How the Air Force Fights 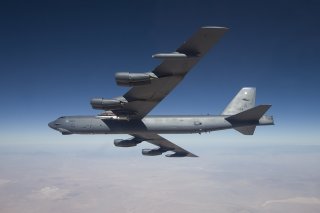 Air-launched hypersonic weapons are no longer part of some distant, anticipated future warfare scenario. They are here. So much so that the Air Force is taking new steps to acquire as many as twelve new AGM-183 Air-Launched Rapid Response Weapon in 2022, bringing the paradigm-changing weapons closer to warfare.

ARRW is a fast emerging boost-glide hypersonic weapon reported to be able to reach speeds of Mach 7 to descend upon targets.

“ARRW is a new start, and $161 million is added to procure 12 weapons in FY ‘22,” Maj. Gen. James D. Peccia, the Air Force’s deputy assistant secretary for budget, told reporters, according to a Pentagon transcript.

Lockheed Martin first received the contract to develop the ARRW in 2018, and the first captive-carry test of the hypersonic missile platform was conducted on a B-52H at Edwards Air Force Base in California in 2019.

Earlier this year, an Air Force B-52 fired a simulated shot at a target six hundred nautical miles away with an ARRW, a process through which the B-52 received target data from sensors one thousand miles away at Joint Base Elmendorf-Richardson, Alaska, according to an Air Force report.

Air-launched hypersonics certainly introduce new tactical dynamics for air attack missions, as they can of course hit targets exponentially faster than most existing weapons, potentially destroying an enemy target before there is a chance to respond. Of course, this also enhances stand-off range possibilities for air platforms which might otherwise need to operate in closer proximity to incoming hostile fire.

An ARRW-armed B-52 bomber can, for instance, target enemy air defenses without needing to operate within striking range of enemy air defenses. The weapons open up new possibilities for less stealthy platforms such as a B-52 bomber by introducing more great war scenarios wherein a large platform could add great value in a contested, or “high-end” warfare environment. A hypersonic-armed B-52 bomber will be able to launch high-speed precision attacks without itself becoming more vulnerable.

A B-52 bomber could operate as an armed airborne command and control node able to share real-time targeting information with forward-operating drones able to fly in high-risk areas. A reconnaissance and surveillance drone could, for instance, find ground or air targets for a B-52 bomber, send target specifics, sensor data and even video feeds directly to a B-52 bomber in position to fire a hypersonic missile.

As a boost-glide weapon, the ARRW skips off the upper boundaries of the earth’s atmosphere before using its speed of descent to propel itself down onto a target. The Air Force decision to buy twelve in 2022 suggests that the weapon is fast reaching new levels of maturity as it progresses toward operational service. This would indicate that developers have managed to address certain challenges known to be central to achieving successful hypersonic flight. For example, a Raytheon press statement on hypersonics cites “thermodynamics” or “heat” management as essential to the effort. Objects, such as weapons, traveling at hypersonic speeds naturally generate a massive amount of heat which must be properly managed for the weapon to function. Specific materials designed to withstand high temperatures need to be used as well, Raytheon data states. One of the greatest challenges with hypersonics is what the Raytheon paper refers to as the “effects chain”—the command and control, networking and sensor technology sufficient to achieve the requisite guidance, targeting and precision flight.