The AJ 37 Viggen was a Real Aerial Killer 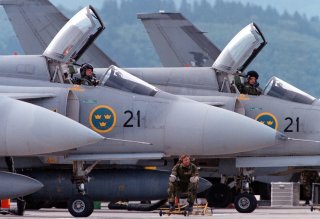 Here's What You Need to Remember: Smart design also meant the Viggen could rearm extremely quickly, turnaround times were clocked at under twenty minutes with conscript ground crews, maximizing the rapidity to which the Swedish Air Force could respond to an attack. It was estimated that aircraft could fly upwards of five sorties a day.