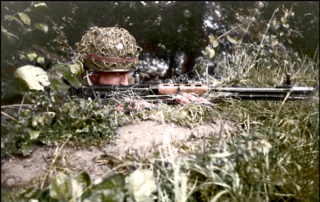 Here's What You Need to Remember: Though imperfect, the FG 42 had several important features in its favor. And they were some of the best weapons in the war.

During the Second World War, Germany’s Fallschirmjäger, or paratroopers, formed a branch of the Luftwaffe that were among the first paratrooper soldiers ever used in combat. A specialized branch, the German paratroopers had a degree of independence not enjoyed by other branches of the Wehrmacht, leading to several innovations not seen in other branches of the German Wehrmacht—one of which was the legendary FG 42 rifle.

The story of the FG 42 starts during the battle of Crete.

The 1941 invasion of Crete was supposed to be a daring surprise raid — German Fallschirmjäger would take the island, which they anticipated as being lightly guarded, by surprise. And though the battle was ultimately a German victory, it came at a high cost.

Fallschirmjäger troops were a light infantry force. As such, they were armed with some Nazi Germany’s standard light-infantry weapons, the Kar98k bolt-action rifle, MP40 submachine guns, and MG 34 machine guns.

Shockingly, Germany’s Fallschirmjäger made their jumps separately from their weapons, which were dropped off via parachute canisters. Armed with pistols, bayonets, and occasional grenades, Fallschirmjäger troops were extremely vulnerable when they landed on the ground. German Fallschirmjäger losses during the first several days of fighting were disproportionately high.

In the aftermath of Crete, the decision was made for a new paratrooper weapon. The design requirements were myriad and strenuous: the final product had to combine the suppressive fire capabilities of the MG 34, and had to be fired and operated by an individual soldier, rather than being a crew-served weapon, while having similar accuracy and range as the Kar98k. Additionally the new weapon had to use box magazines rather than ammunition belts.

Despite the challenges, the resulting design was actually quite impressive. By using the 7.92×57mm Mauser, the standard German rifle cartridge during both the First and Second World War, gunsmiths were able to ensure that the FG 42 had good range and accuracy compared to the weapons it would be replacing.

Though imperfect, the FG 42 had several important features in its favor. At less than eleven pounds, the FG 42 was lighter than the M1 Garand, the United States’ standard-issue semi-automatic rifle. Despite being chambered in a full-sized rifle cartridge, firing the FG 42 fully-automatically was surprisingly smooth and controllable, thanks to an effective muzzle brake and a recoil spring that was hidden inside the stock. Additionally, small receiver-mounted rails were installed that allowed optics to be mounted to the weapon, greatly aiding accuracy at a time when optics were almost exclusively reserved for sniper roles.

Early models had an almost absurdly angled pistol grip that was unergonomic to use. The magazine well’s left-hand side placement made the weapon somewhat unbalanced. The first FG 42 run also had bipods that rattled during automatic fire and an integrated bayonet that was not particularly robust.

Ultimately however the FG 42, both early and late war models, were never produced in large numbers, due to the weapon’s intended niche paratrooper role. Coupled with the costly German victory at Crete, German Fallschirmjäger were increasingly used as infantry soldiers, negating the need for a specialized paratrooper weapon. Still, the FG 42 was an effective, if over-engineered weapon that did have an impact on subsequent post-war machine gun design.