Alternate History: This Jet Almost Stopped the F-22 from Existing 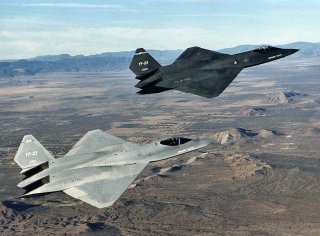 Here's What You Need to Know: Northrop’s YF-23 may not have been far behind, given that the Air Force initially chose both Lockheed and Northrop proposals to build the aircraft.  Perhaps both jets could operate at “supercruise” speeds, meaning they could achieve prolonged supersonic flight missions without needing its afterburners.

Northrop’s YF-23 may not have been far behind, given that the Air Force initially chose both Lockheed and Northrop proposals to build the aircraft.  Perhaps both jets could operate at “supercruise” speeds, meaning they could achieve prolonged supersonic flight missions without needing its afterburners. This of course massively extends mission effectiveness, overall speed, time to target and dwell time enabling greater target acquisition as well.