America’s Iowa-Class Battleships Were the Fastest Ever Built 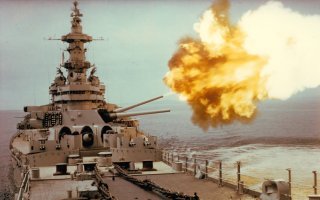 Here's What You Need to Remember: With the Cold War over, Missouri decommissioned in March 1992. The cost of maintaining the battleships in service, which required large crews and specialized training, was simply too much for the Navy to bear.

The North Carolina–and South Dakota–class battleships were designed with the limits of the Washington Naval Treaty in mind. Although much more could be accomplished in 1938 with thirty-five thousand tons than in 1921, sacrifices still had to be made. As had been practice in the first round of battleship construction, U.S. Navy architects accepted a low speed in return for heavy armor and armament. Consequently, both the South Dakotas and the North Carolinas had speeds a knot or two slower than most foreign contemporaries. The Montanas, the final battleship design authorized by the Navy, would also have had a twenty-eight-knot maximum speed. In any case, Japan’s failure to ratify the 1936 London Naval Treaty bumped the maximum standard tonnage from thirty-five to forty-five thousand, giving the designers some extra space to work with. The result was the Iowa class, the most powerful and best-designed battleships ever built.

Robert Farley, a frequent contributor to TNI, is author of The Battleship Book. This article first appeared last year.