America’s Loitering Radar-Hunting Missile is Due For a Comeback 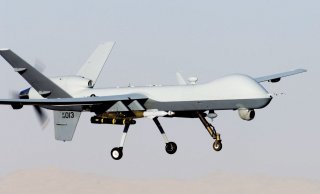 Here's What You Need to Know: The premise behind Tacit Rainbow was to eliminate or suppress enemy air defenses using a loitering munition equipped with an anti-radiation guidance system.

In the 1980s, a controversial radar-hunting weapon system known as the AGM-136 Tacit Rainbow blurred the lines between missile and drone, leading to a loitering anti-radiation missile that could suppress or destroy enemy air defenses like no other weapon before it or since.

Amid a slew of bad press, underwhelming performance, and a crumbling Soviet threat, the Tacit Rainbow program was unceremoniously canceled in 1991, but as the world returns to a focus on Great Power Competition, it may be high time that we see Tacit Rainbow, or at least an updated successor, make its triumphant return.

Put simply, anti-radiation missiles home in on the radar air defense systems use to detect and engage incoming aircraft, making these missiles a valuable weapon in the initial days of a conflict when America’s warfare doctrine calls for establishing air superiority. As radar arrays come online to detect incoming planes, specially equipped aircraft can fire high-speed anti-radiation missiles (HARM) like the AGM-88E AARGMto follow the radio waves back to their source and destroy it.

The traditional approach to engaging enemy radar arrays, commonly known as Wild Weasel operations, involves sending fighters armed with anti-radiation missiles into contested airspace to wait for radars to come online to engage them. They then fire their radar-hunting missiles and hope the array stays online long enough for their weapon to find its target… all without getting shot down in the process.

Of course, not all anti-radiation missiles are designed to be launched from aircraft to take out land-based radars. There have also been air-to-air and even surface-to-air anti-radiation missiles developed around the world for different applications, and in fact, Tacit Rainbow itself began development as a surface-launched munition meant to take out these enemy radar arrays without having to put piloted aircraft in harm’s way.

Wild Weasels were an endangered species over Vietnam

The premise behind Tacit Rainbow was born out of the Vietnam War, where the very concept of Wild Weasel mission sets developed out of necessity, thanks to the introduction of Soviet Surface-to-Air missile platforms in the nation’s North. Throughout the conflict, pilots would literally use their fighters, sometimes jets as dated as F-100 Super Sabers, to bait enemy air defenses into powering on to give their wingmen’s anti-radiation missiles a good target. It was an effective means of suppressing air defense systems, but it was also incredibly dangerous.

In May of 1966, the first modified F-105 Wild Weasel fighters, replacements for the far less capable F-100s, arrived near Vietnam, with 11 positioned in Korat Royal Thai Air Force Base, and seven others deployed to the 355th Fighter Wing at Takhli Air Base, both in Thailand. Within six weeks of arriving, all seven Wild Weasels assigned to the 355th had been shot down. Within six more weeks, the number of operational SAMs in the region had ballooned to more than 100.

At the time, flying 100 missions was considered a full combat tour, earning you a ticket home, but Wild Weasel pilots were tasked with such dangerous missions that reaching that figure seemed all but impossible at times.

“By your 66th mission you’ll have been shot down twice and picked up once,” F-105 pilots would commonly joke throughout the war.

By the late 1970s, the Wild Weasel mission was being passed on to the F-4G, which was a modified version of the previous and capable F-4E Phantom II. These Wild Weasels were the most capable in the job yet, with a top speed of better than Mach 2.2 and the ability to carry 18,650 pounds of ordinance, but make no mistake, the immense danger associated with Wild Weasel missions remained as prevalent as ever.

Marrying missiles and drones: The birth of Tacit Rainbow

While the use of drones in combat is often seen as a characteristic of the Global War on Terror, drones and remotely piloted aircraft were already in service to the United States and other nations decades before Predators began prowling the skies over the Middle East. In fact, pilotless aircraft date back almost as far as piloted ones do, with the first credited to Sopwith Aviation in 1917. By the 1940s, B-17 Flying Fortresses were being converted into remotely piloted drones to collect data around nuclear explosions, and by the early ’70s, Lockheed’s supersonic D-21 reconnaissance drone was flying (unsuccessful) missions over China.

There was no doubt that pilot-less aircraft could be a benefit to America’s defense apparatus by the early 1980s, and with the ever-present threat of war with the near-peer Soviet Union looming, Wild Weasel missions weren’t looking any safer. As a result, the Defense Advanced Projects Research Agency, or DARPA, began exploring the idea of combining the two concepts into a single radar-hunting UAV, or unmanned aerial vehicle.

Some of you may already be shouting at the screen that a marriage between ballistic missiles and drones had already occurred in the form of cruise missiles, which originated with Germany’s V-1 during World War II. You’re right, but DARPA’s new weapon was to be more drone than missile in comparison. Rather than flying like an aircraft to a target, as is common for cruise missiles, they wanted a munition that could loiter over a target area for extended periods of time, waiting and watching for enemy radars to come online before plunging itself into any target that appears.

At the time, DARPA was using a two-word naming convention for their programs, with “tacit” serving as the first word and a seemingly random noun as the second. Thus, their new weapon system was dubbed, Tacit Rainbow.

How it was meant to work

The premise behind Tacit Rainbow was to eliminate or suppress enemy air defenses using a loitering munition equipped with an anti-radiation guidance system. Importantly, the weapon wouldn’t have to actually destroy enemy radar to be successful in its mission. In sufficient volume, Tacit Rainbow missiles could force an enemy to leave their air defenses offline to avoid their destruction, leaving American aircraft to operate freely in the area.

Throughout this time, Tacit Rainbow remained shrouded in absolute secrecy under “Special Access” security protocols and was only reduced to Top Secret status around the same time the program was adjusted in focus.

“The Tacit Rainbow was to be launched from B-52G and F-16 aircraft, cruise to a designated position, loiter, search for preprogrammed threat emitters, and attack those emitters.”

“Report on the Audit of the Acquisition of the Tacit Rainbow Anti-Radiation Missile System” via the Department of Defense Inspector General.

The first Tacit Rainbow test launch took place on July 30, 1984, with at least 30 others of varying sorts to follow via multiple platforms, including bombers, fighters, and ground-based rocket launchers. The weapon carried a 40-pound WDU-30B blast fragmentation warhead and it may have leveraged the same or similar antenna and RF seeker found in the AGM-88 HARM missile. Unlike the AGM-88, however, Tacit Rainbow couldn’t be easily defeated by simply turning off the targeted radar array. If it lost its target, the weapon would simply switch back to loitering mode and begin its hunt anew.

Even today, decades after Tacit Rainbow was revealed to the public in 1987, many details about the weapon’s legitimate capabilities remain difficult to ascertain. However, some particulars can be gleaned through the very public discourse regarding its budgetary overruns, alleged political corruption, and its direct involvement in Soviet-American arms reduction talks that took place in 1990 and 1991. Other details have been revealed through the steady release of documents over the years, including the Joint Tactical Autonomous Weapons System Program Office’s Tacit Rainbow program overview (created while the program was ongoing) and the Inspector General’s 1991 audit of the program’s acquisition process.

Interestingly, some details about the capability offered by Tacit Rainbow were released not through formal documentation, but rather through an Op-Ed penned by Georgia Senator Sam Nunn and then-acting Air Force Secretary James McGovern in the Washington Post in 1988. In the article, both officials refuted previously published allegations about Nunn’s undue influence over the embattled program (the original article, “Missile Project Close to Nunn’s Heart” by Jack Anderson and Dale Van Atta, is no longer hosted anywhere online). Finally, basics regarding its size, shape, and operation are all available from the National Museum of the U.S. Air Force, where a single AGM-136A Tacit Rainbow used in airworthiness tests remains on display.