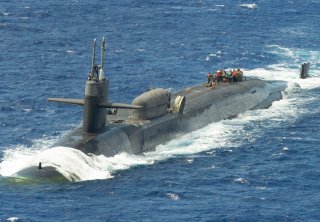 Here's What You Need to Remember: If American subs can hold the line for another 20 years, China might age right out of its current, aggressive posture without ever having attacked anyone. That’s because economic and demographic trends in China point towards a rapidly aging population, flattening economic growth and fewer resources available for military modernization.

The bad news came from Lee Fuell, from the U.S. Air Force’s National Air and Space Intelligence Center, during Fuell’s testimony before the U.S.-China Economic and Security Review Commission in Washington, D.C. back in 2014.

The knock-on effects of deterring America could be world-changing. “Backing away from our commitments to protect Taiwan, Japan or the Philippines would be tantamount to ceding East Asia to China’s domination,” Roger Cliff, a fellow at the Atlantic Council, said at the same U.S.-China Economic and Security Review Commission hearing on Jan. 30, 2014.

According to then-Adm. Cecil Haney, the former commander of Pacific Fleet subs, on any given day 17 boats are underway and eight are “forward-deployed,” meaning they are on station in a potential combat zone. To the Pacific Fleet, that pretty much means waters near China.

Able to lurk silently under the waves and strike suddenly with torpedoes and missiles, submarines have tactical and strategic effect greatly disproportionate to their relatively small numbers. During the 1982 Falklands War, the British sub Conqueror torpedoed and sank the Argentine cruiserGeneral Belgrano, killing 323 men. The sinking kept the rest of the Argentine fleet bottled up for the duration of the conflict.