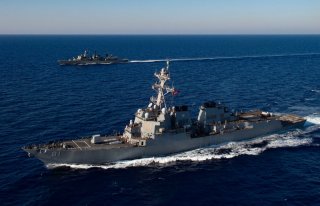 Several months ago, US Navy Secretary Kenneth Braithwaite said he believed the service was ‘at a turning point’ in its history. The navy’s 30-year shipbuilding plan—projecting what it will look like and what vessels it needs—had just been rejected by the Pentagon.

The plan was reportedly considered too conservative and based on outdated assumptions, including optimistic funding projections. A new plan is being developed by the Office of the Secretary of Defense, the Joint Chiefs of Staff and the Hudson Institute, with the navy largely sidelined.

A US Navy that is fiscally sustainable, and optimised for sea control, forward presence and distributed operations, will enable the reforms being undertaken by the other US military services to succeed.

Many analysts have taken heart from the reform and modernisation of the US Marine Corps, largely seen as an intensely positive sign of America’s continued commitment to the Indo-Pacific. The commandant’s 2019 force planning guidance and force design are bold and display an understanding of the operational challenges the US faces from China’s military modernisation and growing area-denial and power-projection capabilities.

More importantly, the documents begin to make the difficult decisions required to sustain an American military presence in the region in an era of flatlining defence budgets and constrained fiscal resources.

But overshadowing the marines’ efforts is the fact that the navy is struggling to do the same.

The marines’ risk-taking and drive for reform will not bring an effective US presence in the region if the navy is unable to equally transform. With at-sea collisions, pier-side fires, political scandals, rotating civilian leadership, criticism over the slow adoption of new technologies and an unbalanced fleet architecture, some analysts fear there are deeper systemic issues within the service.

The navy’s struggle to plan its future stems from interrelated structural problems.

First, the force is too small for what is being asked of it, and over the past decade it has wrestled with shrinking size and increasing operational tempo. The fleet has shrunk by 52%, from 594 ships in the late 1980s to 294 today—but has forward-deployed the same number of vessels, approximately 100 at any time. That’s placed increasing demands on a dwindling fleet.

The requirement for sustaining a persistent presence with fewer resources has taken its toll. It has also led to quick fixes, like extended deployments, instead of the Pentagon and Congress reassessing the fleet’s missions. This has meant less time for training and maintenance, particularly for forward-deployed forces where the demand is greatest. Tragically, this pressure caught up with the navy in 2017 when USS Fitzgerald and USS John S. McCain were involved in separate collisions that killed 17 sailors. A review found longer deployments, inadequate training and reduced maintenance led to poor readiness.

Second, while there’s broad agreement that the fleet must grow, Congress and the navy have been unable to agree on a fiscally sustainable—and politically agreeable—shipbuilding plan.

In late 2016, the navy’s force structure assessment for the Obama administration and Congress found that a 355-ship fleet was the minimum needed to meet the Pentagon’s ‘strategic guidance’. The assessment was launched by navy secretary Ray Mabus in open defiance of the Obama administration, which wanted the navy to shift resources dedicated to building certain ship classes to other priority capability areas. Donald Trump’s election in 2016 further complicated matters. Besides touting the establishment of a US space force, Trump’s only other significant political commitment in terms of the US military was to increase the navy’s fleet size to 355.

His promise to grow the fleet and the navy’s call for more vessels based on existing classes resulted in the 355-ship goal being set in law by sea power advocates in Congress. While this was a victory for those arguing for a larger force, it has also distorted the debate among the navy, the Pentagon and Congress on the future fleet, leaving little political room for alternative models.

Last, it may not be possible to build the fleet to 350-plus vessels within resource constraints, without a radical change in force structure or in the way ships are counted. A Congressional Budget Office analysis of the 2020 shipbuilding plan—which aimed to achieve a 355-ship navy by 2034—estimated that it would cost on average US$31 billion per year in 2019 dollars, a third more than the navy judged its plan would cost.

That would almost double the navy’s average appropriation over the past 30 years.

The navy, and Congress, appear to be in denial about the structural and historical realities of naval construction. The navy’s estimates for a 355-ship fleet do not account for the faster growth in labour and materials costs in shipbuilding compared with the rest of the economy, which has led to above-inflation increases. The cost of staffing and maintaining the larger fleet would also be vast—the Congressional Budget Office estimated that support costs would reach US$90 billion a year by 2049, up from the average of US$60 billion.

To maintain fleet strength, defence budgets need to increase in real terms, and that isn’t going to happen. The Pentagon’s latest budget request reflects this reality, representing a 20% decrease for shipbuilding from the previous year, even though it didn’t match the White House directives.

The navy has attempted to shift resources and develop new concepts of operations—and to integrate new technologies—to overcome some of these structural challenges. The Marine Corps F-35B ‘Lightning Carrier’ concept is an example. It also demonstrates the benefits of further marine–navy integration. The award of a contract for the construction of 20 frigates based on Fincantieri’s FREMM design for a projected average hull cost of under US$1 billion is also positive. The current chief of naval operations, Michael M. Gilday, is conducting a ‘stem-to-stern review’ of the service in search of up to US$40 billion in savings for new platforms. But without significant cuts to operational tempo or overall size, that’s unlikely to yield the savings needed.

Similar efforts have also stagnated. In 2019, the navy proposed deactivating some large surface combatants, including 22 Ticonderoga-class cruisers and the aircraft carrier USS Harry S. Truman to save money. Congress rejected both proposals. The service also has non-negotiable priorities, including construction of 12 Columbia-class ballistic missile submarines, likely taking up to 25% of the shipbuilding budget over the next decade.

Pushing more aggressively into autonomous systems or vessels with fewer crew may answer the budgetary pressures and the need to grow the fleet. The navy has started experimenting with unmanned systems, recommending procurement of several large unmanned surface vessels last year. However, Congress also put the brakes on that plan, believing the navy hadn’t developed sufficient understanding of how they’d be used.

The US Navy’s evolution is a critical issue for allies like Australia as it will provide the backbone for any serious military intervention in the Indo-Pacific. However, for the past four years the navy appears to have been going in circles with its future plans, caught between growing operational demands and a fiscally and politically unachievable shipbuilding goal.

While the navy has the capacity to meet the challenges in the Indo-Pacific, its presence is globally orientated. Without reorientation of its forces from the Atlantic or the Middle East, it will be hard-pressed to provide the force it needs in the Indo-Pacific within resource constraints.

Brendan Thomas-Noone is a research fellow at the United States Studies Centre at the University of Sydney.