Is America On the Brink of a Coronavirus Inflation Crisis? 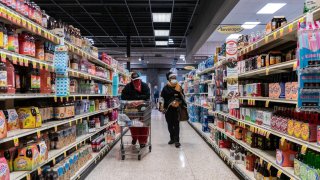 Statistics can be misleading, but I am sure you know that. Identical economic data can telegraph entirely different messages depending on how statistics are calculated and interpreted. This is especially true when recent data includes large positive or large negative values like the data on inflation. Let’s take a closer look at recent data on the CPI inflation rate.

The headline news reports a CPI inflation rate of 1 percent as calculated by the Bureau of Labor Statistics in their most recent estimate (July). The 1 percent rate represents the lagging 12-month percentage change in the seasonally-adjusted Consumer Price Index (CPI) for all urban consumers. Many reports characterize the current reading as benign, suggesting that inflation is well under control. This in turn provides a justification for the Federal Reserve to continue to monetize massive Federal government deficits since there is “no sign of inflation”.

The headline measure of inflation is focused on the past 12 months, not the next 12 months. The exact same July CPI reading tells an entirely different story if you annualize the month-to-month changes in the index. The lockdown coincided with large declines in the price of transportation and energy which pushed the CPI lower in March, April, and May. Energy and transportation costs began to increase as the economy reopened in June and July while food prices moderated slightly. On balance, beginning in June and continuing through July, the CPI has been growing at more than a 7 percent annualized rate — a fact you might miss if you just focused on the headlines.

Because of the large month-to-month declines in the March, April, and May CPIs, the 12-month headline CPI inflation rate will remain below actual month-to-month annualized inflation rates for many months to come, even if monthly changes in the CPI continue at the June and July pace as illustrated by the dotted blue line in the chart below.

When it comes to inflation, it is not only data about what happened to prices in the recent past that matters. Just as important are consumers’ and investors’ expectations about the future rate of inflation. In a recent statement regarding monetary policy objectives, the Fed highlights this fact when it states, “keep[ing] longer-term inflation expectations firmly anchored, thereby fostering price stability and moderate long-term interest rates…[enhances] the FOMC’s ability to promote maximum employment.”

Expectations about future inflation can be measured by surveys that ask people about their own forecast of inflation and they can also be estimated from yields on various US Treasury securities and derivatives. The chart below shows recent estimates of the five-year expected inflation rate. One estimate is from a University of Michigan survey of consumers, and the second estimate is extracted from Treasury bond yields. Both measures of expected future inflation have been increasing since March, when the Fed began COVID-19 emergency support measures that increased the nominal purchasing power of consumers and business at a time when the output of goods and services was declining precipitously.

The last time the CPI posted consecutive month-to-month increases as large as the recent June-July moves was in May, June, and July of 2008. At that time, a reading of the FOMC meeting transcripts indicates that the Fed was very worried about the spike in inflation (and seemingly unaware of the financial system pressures that would lead to crisis in a few short months).

No one knows if prices will continue rising at the pace set in June and July, but if this recent trend continues, politicians of all stripes may need to revise their apparent belief that the Fed has nearly unlimited ability to fund government deficits without sparking inflation. Depending on how you interpret recent data on inflation, it might be premature to dismiss the possibility that problematic inflation may soon return.

This article by Paul H. Kupiec first appeared in AEIdeas on August 20, 2020.