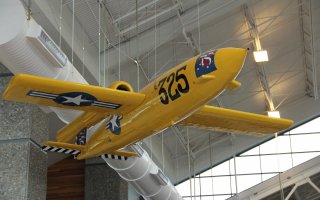 Here's What You Need to Know: The Loon provided valuable data for the design and construction of even more advanced weapons.

Even before the first of the Nazi's V-1 "Buzz Bombs" rained terror and death on London, American military leaders knew such a weapon was in development. In August 1942, an early test version was discovered and photographed by agents after it crashed on the island of Bornholm in the Baltic Sea. After months of intelligence-gathering the rocket was traced to Peenemünde, on Germany's Baltic Coast—the top-secret German missile test and development site. Additional intelligence data was obtained via aerial photography, and in 1943 the United States began to develop its own jet-powered bomb.

Various aircraft makers began to work on prototypes, but in July 1944, just three weeks after the first Vergeltungswaffe 1 (V-1) surface-to-surface, pilotless flying bomb struck England, engineers in the United States were provided with what they needed to advance their efforts. One ton of parts from "dud" missiles were sent to Wright-Patterson Field in Ohio and work began on America's version of Hitler's terror weapon.

Republic Aviation worked to copy the airframe of the weapon while Ford Motor Company reverse engineered the 900-lb. thrust Argus Schmidt pulse jet engine. In short order, the United States had the JB-2, commonly dubbed the "Loon." It was designed to carry a 2,200-pound high explosive warhead to a range of 150 miles—and it could be launched from the ground, ship, or aircraft. It featured an air-breathing pulsejet motor at the rear of the rocket.

The first JB-2 test flight took place at Eglin Field, Florida in October 1944, and subsequently Republic and Ford were contracted to build 1,000 of the JB-2s for use by the Army and Navy. Production began in January 1945 in preparation for the invasion of Japan. A load of JB-2s was en route to the Pacific on a U.S. aircraft carrier when the atomic bombs were used on Hiroshima and Nagasaki in August 1945, resulting in Japan's surrender and rendering the JB-2 moot by that point.

The United States Army Air Forces canceled production when the war ended, and none of the weapons were actually used in combat. However, the Loon provided valuable data for the design and construction of even more advanced weapons.

The example in the Air Force Armament Museum is painted canary yellow with a red nose cone, and dark blue/white/red U.S. Army Air Corps/Forces star and bars insignia with the number 213 on the side. There are also dark blue bands around the nose and a white star pattern on the tail. It isn't clear however if the ones deemed for use in combat would have been painted so ostentatiously—especially as another example in the National Museum of the United States Air Force is painted in a far more subdued two-tone gray paint scheme.

While the Loon wasn't deployed in combat, the German V-1 killed more than 6,000 people in England and wounded another 18,000—highlighting the potential of the Buzz Bomb.