Is America Headed Towards an Inflation Crisis? 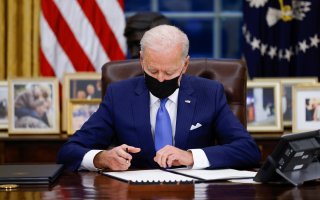 At the end of last year, Congress passed and President Trump signed a $900 billion COVID-19 relief bill. Of course, that was hardly the first fiscal action taken by Washington in response to the pandemic. There was also the $8.3 billion Coronavirus Preparedness and Response Supplemental Appropriations Act, the $2.3 trillion Coronavirus Aid, Relief and Economy Security Act, and the $483 billion Paycheck Protection Program and Health Care Enhancement Act. As I noted in my recent The Week column, “While many Americans may be under the impression that the U.S. has been doing its fiscal response on the cheap, that’s not the case. As it stands now, only Japan has spent a greater share of its economy in fighting the virus and its economic impact.”

But more fiscal relief could be on the way. President Biden would like to tack on another nearly $2 trillion, which would put the US way ahead of other advanced economies in terms of COVID-19 spending. There are also some on the political left who would spend even more. From their perspective, why not? If your baseline assumptions are that interest rates and inflation will stay stuck at historically low levels, why not keep the taps open and the money flowing?

But what if that assumption is wrong? What if, even before the pandemic and tsunami of government spending, advanced economies like America’s were headed toward a future of higher inflation and higher interest rates? Might the knowledge of that contrarian future affect the blase attitude of some policymakers and analysts toward rapidly rising debt levels?

My answer to that last question: “I don’t know, but it should.” Policymakers should avoid making massive fiscal bets that the future will be the same as the recent past. And in this case, there’s at least one plausible theory that challenges the current baseline thinking. This argument is laid out in the 2020 book “The Great Demographic Reversal: Ageing Societies, Waning Inequality, and an Inflation Revival.” Authors and economists Charles Goodhart and Manoj Pradhan make the case that the underlying context of the current macroeconomic situation — persistently low interest rates, low inflation — was created by a late 20th-century positive labor-supply shock driven by demographics trends (a flood of baby boomers into the job market and greatly increasing global population) and the inclusion of China and Eastern Europe into the global labor market. This shock and the accompanying shift of manufacturing to Asia over the past 30 or 40 years has meant (a) lower wages in rich economies than they would have been otherwise, (b) reduced private-sector union bargaining power, (c) widespread deflationary pressures, and (d) falling interest rates.

But those demographic and globalization shocks are now reversing, Goodhart and Pradhan write. Wage differentials between China and the West have narrowed, and its working-age population is now shrinking. Indeed, working-age populations are either peaking or falling globally, outside of Africa and India. What isn’t shrinking is the number of retired old people. And they consume rather than produce. Goodhart and Pradhan:

The great demographic reversal and the retreat from globalization will bring back stronger inflationary pressures – this is our highest conviction view. Worsening dependency ratios [the number of dependents vs. the number of workers] naturally raise inflation. The lesser availability of labor at home and abroad will serve to restore the (previously diminished) bargaining power of labor. It will also end up raising the equilibrium natural rate of unemployment. Households will save less, and invest more in housing, than some mainstream models suggest. The non-financial corporate sector may have to invest more to hold down unit labor costs, though we are agnostic about the various causes for recent low investment rates. But we doubt that politicians, facing rising health and pension costs, will be prepared or able to raise taxes enough to equilibrate the economy via fiscal policy. … Hence inflation will rise. That will lead central banks to raise nominal interest rates in pursuit of their inflation targets. In turn, that will put them at loggerheads with ministers of finance and prime ministers/presidents, especially those of a populist inclination. In any such conflict between politicians and central bankers, we would back the former to win – that conflict has already begun.

Certainly a lot here for serious policymakers to consider when making taxing and spending decisions going forward. For more on this economic view, please check out this recent AEI event with Goodhart and Pradhan.