Is America Still "the Land of Opportunity?" 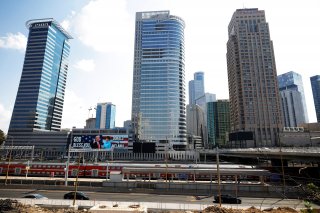 Critics on both the left and the right point to widespread poverty, stagnating wages, skyrocketing inequality, and the end of upward mobility in order to explain how capitalism has failed Americans. But it’s important to carefully evaluate each of these claims — to see how accurate they are, and to place them in the proper context. So on last week’s episode of Political Economy, I spoke with Scott Winship about the current state of economic opportunity and poverty in America.

Scott is a resident scholar and the director of poverty studies at AEI, where he researches social mobility and the causes and effects of poverty. Previously, he served as the executive director of the Joint Economic Committee, where he spearheaded the Social Capital Project.

What follows is a lightly edited transcript of our conversation, including brief portions that were cut from the original podcast.

Pethokoukis: On the day we’re recording this, the Federal Reserve put out their big survey of consumer finances, which they do every few years. There were a couple of real newsy items in there. One of them is that families near the bottom of the income and wealth distribution had been seeing big gains the past few years leading into the pandemic. I don’t know if you had seen that news, but I wanted to get your take on that.

Winship: I haven’t had a chance to play with the numbers yet. I understand there’s a neat little slick, interactive tool that you can use now that I’m looking forward to. It really does kind of confirm some other news that we’ve seen recently. A few weeks ago, some new numbers on food security showed that through December, the food problems that households have experienced have declined for quite a few years now. And then just last week, or a couple of weeks ago, the new poverty numbers came out that showed that poverty was at an all-time low in 2019. That was true for African-Americans. That was true for children. It was true for female-headed families with kids. So it really is kind of another data point showing that pre-lockdown anyway, things were going really well for American families compared with the past.

Do you think people overestimate or underestimate how much poverty remains in America?

I think that people generally have too negative a view of the facts on the ground. I think they believe there’s a lot more poverty than there is. I think they think that middle-class household incomes are not as high as they are kind of across the board. I guess the unemployment figures get revised on a monthly basis. I think people maybe appreciate a little bit more how strong the unemployment figures were in February. Although even there, you get pushback from folks who say, “Well, the unemployment rate doesn’t really mean anything anymore because there are so many people who aren’t even looking for work, and they’re not counted in that data.” That’s actually a pretty bad argument for reasons we can go into also. But in general, I think people do have an overly negative take on things.

That’s not to say we can sit back and not worry about folks. I think we can always do better when it comes to reducing poverty and increasing upward mobility. The trends on upward mobility are not nearly as positive as some of the other trends. There really is a declensionist bias, I think in, the way that people view how the economy was doing even before the pandemic hit.

The Fed study highlighted something that’s continued from previous years. To quote Rachel Siegel from The Washington Post, “Even during the boom-time final stretch of a record economic expansion, the typical white family had eight times the wealth of a typical black family in 2019, and five times the wealth of a typical Hispanic family, a sobering reminder of the country’s vast inequality before those gaps widened during the pandemic.”

How should we think about these racial gaps, particularly the fact that they’ve persisted across many decades?

I’ve tended to try to highlight black and white inequalities as well in my research. The poverty rate is still quite a bit higher among African-American families than white families. There are big economic mobility differences between blacks and whites. That said, wealth numbers are just really hard to think about. And the reason that the racial wealth gap is so large is that levels of wealth are so low among African-American families. And to some extent, again, that does reflect real racial inequalities, but to some extent, it also just reflects how hard it is to measure wealth.

Wealth is just your assets minus your debts. For instance, we count student loans on the debt side which you might think makes a lot of sense, and, in a lot of ways, it does make a lot of sense. But we don’t count on the asset side: the human capital that these student loans or financing. People don’t just take out student loans and incur all this debt without any benefit. If we counted the human capital that’s getting financed by it, those things would cancel out to some extent. That’s important for the wealth gap between blacks and whites, because it would raise wealth levels for blacks and the dramatic ratios would then look a lot smaller. Now, they look so big just because the numbers for blacks are so small.

Similarly, we count a debt that people take on for car loans, but the survey of consumer finances data doesn’t count cars as an asset. So again, researchers tend to make a number of methodological decisions that tend to drive down wealth levels that affect the bottom more than it affects higher-up. And that makes the wealth gaps seem a lot bigger than maybe they are.

I would guess that most people, if they heard those numbers, would say, “Well, that’s because black Americans, they don’t have as much money in the market, or they aren’t as likely to own a home.” I think a lot of people might guess that. Are those factors true? Are they important?

They’re true. There definitely are inequalities in both of those areas. But homeownership rates are surprisingly high, I think, among all groups in the United States. There are a lot of inequalities in terms of equities, mostly for most families. Those are in the 401Ks or other retirement assets. But again, the measurements are really tricky. Over half the population will rely on Social Security for over half of their retirement income. If we didn’t have Social Security — which, by the way, doesn’t get counted as wealth or as an asset — a lot more people would save for their own retirement. And again, that would make the levels at the very bottom look higher, and the ratios would look a lot smaller than an eight-times difference. Even for people like me who care a lot about racial inequalities, I think looking at wealth gaps is just not a super informative way to go.

It seems like we’re talking more about wealth inequality than income inequality these days. So, when I hear numbers like “the top 1 percent owns 40 percent of the wealth and the bottom half owns only 2 percent,” I think I’m supposed to be alarmed and prepared to fight this inequality. How do you think we should react to these numbers?

There is a lot of inequality in the United States. Last year — but blessedly not so much this year — there was a huge debate that took place surrounding three well-known French economists — Thomas Piketty, Emmanuel Saez, and Gabriel Zucman — who argued that we had really massive levels of income concentration and wealth concentration. Zucman and Saez put out a book that caught a lot of attention in which they were pushing some of these claims really hard. Those claims got pushed back against very strongly by a number of folks, and it turns out that a lot of the methods that they were using really are pretty questionable and sort of magically all went in the direction of overstating how much inequality there really was.

Inequality is real. It hasn’t increased as much as Piketty, Saez, and Zucman say, but when you shift from income to wealth, you get this real problem of interpretation in terms of what gets counted as wealth and what doesn’t get counted as wealth. If you don’t think Social Security or even Medicare should be counted as wealth, then what’s the rationale for them being such a giant part of our budget? That is a resource that folks at the bottom disproportionately can rely on for retirement security, yet we don’t count it as wealth. So for all of the people who are saving privately for wealth, their savings get counted as assets and as wealth. It makes the shares look a lot bigger at the top, making the inequality look a lot bigger.