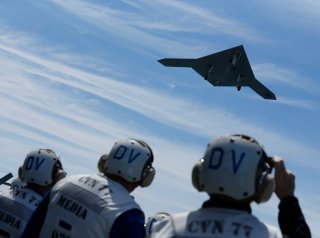 Here's What You Need to Remember: While it is certainly possible that Chinese robots are more capable in terms of autonomy than what may have appeared in the newspaper report, however advanced degrees of autonomy or man-machine networking were not mentioned as potential mission options presented by the robots.

The visible Chinese effort to fast-track new carriers, fighter jets, destroyers and armored artillery vehicles shows no sign of slowing down. Now, a lesser-known but equally impactful commensurate initiative can be seen in China’s apparent attempt to match or exceed the U.S. explosion in the production and development of surface, air and undersea drones.

China also appears to be accelerating the development of land and undersea robots to conduct forward surveillance, deliver supplies, search for targets and even launch attacks. A Chinese newspaper report says the People’s Liberation Army “Pathbreaker” robot is a small, 1.2-ton unmanned vehicle able to hit speeds of thirty kilometers. It is a tracked vehicle, meaning it is configured for rugged terrain and off-road missions and intended for what the Chinese paper calls “armed reconnaissance, fire assault, patrol, search and destroy operations, as well as strike guidance in complicated terrain at high mobility.”

The technical description of the robot indicates it can be teleoperated or programmed to “automatically follow combat personnel and independently avoid obstacles.”  This seems quite interesting, given that the U.S. Army has been teleoperating or remotely controlling robots for more than fifteen years as well as operating with what’s called “leader follower” algorithms wherein an unmanned system mirrors or follows a manned vehicle leading the way. The U.S. Army refined this technology, along with obstacle avoidance, nearly two decades ago and is now operating robots with extremely advanced levels of autonomous navigation.

While it is certainly possible that Chinese robots are more capable in terms of autonomy than what may have appeared in the newspaper report, however advanced degrees of autonomy or man-machine networking were not mentioned as potential mission options presented by the robots. This leads to the question as to whether China can in fact truly compete with current U.S. Army unmanned systems technology.

At 1.2 tons, the new Chinese “Pathbreaker” robot may or may not be similar in size or form factor to the U.S. Army’s emerging Light Robotic Combat Vehicle, a now-in-development program to introduce a new fleet of highly-capable unmanned systems able to independently operate forward, network with air drones and manned vehicles and, for instance, test an enemy perimeter, move to contact or conduct an actual “breach.” The robots are closely aligned with the networking capacity and measure of computer-enabled autonomy, according to U.S. Army developers.

It may simply be that Chinese weapons developers are behind the United States when it comes to advancing levels of robotic autonomy, as it is something the U.S. Army has been working on for many years. Autonomous navigation on the ground is particularly challenging and seen as something more complex and challenging than aerial autonomy, simply due to the number of obstacles, variables and fast-changing conditions. An air drone often has few actual “impediments” to its flight path and, absent some kind of fast emerging enemy aircraft or incoming missile, can align autonomous navigation with little difficulty.

Ground autonomy, however, must operate with extremely advanced algorithms able to make nearly instantaneous decisions in response to dynamic changes in the environment. Perhaps new terrain challenges pop up, or a column of enemy vehicles approaches its path? An autonomous ground vehicle would not only have to “course correct” but make instant determinations regarding any particular obstacle it may encounter.

This is something which, based on the engineering and scientific progress now being cataloged with the Army’s robotic combat vehicle program in terms of artificial-intelligence-enabled autonomy, drone-to-drone networking and unmanned operations in general, the Chinese simply may not be able to match.