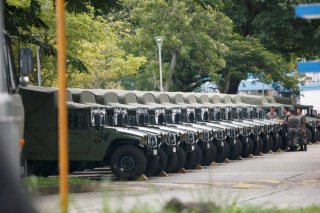 Here's What You Need to Remember: Furthermore, China is known to possess a large mechanized force along with as many as one million ground soldiers, a scenario that clearly presents a threat like no other in the world. Then there is the issue of China’s rugged, mountainous terrain, making it almost impossible for larger mechanized forces to advance.

First and foremost, perhaps most obviously, deployment would be a problem. How could any kind of mechanized land force, with the requisite expeditionary capability, mobilize for some kind of large-scale land assault on the Asian continent. Where would there be a staging area? Possibly India, a major U.S. ally, could offer some kind of option. Abrams tanks, for example, need to be shipped, deployed, and prepared, as do larger infantry carriers, howitzers, and other weapons systems. For this reason, the U.S. Army has based its approach on the prospect of joint-attack options with force concentrations possibly launched from Japan, Australia, allied island areas south of China, such as the Philippines or South China Sea area.

But what about the Pentagon’s plan for a fast-emerging modern Army specifically intended to be more expeditionary, deployable, and air-empowered?

These aircraft have nearly double the range of Black Hawk, Apache, and Kiowa helicopters, bringing an entirely new dimension to land-air attack possibilities. The new Attack-Scout and Long-Range FVL helicopters will double combat radius and hit speeds well above 200mph.

The article first appeared in July 2020 and is being republished due to reader interest.